I am the light of the world. Whoever follows Me will never walk in darkness, but will have the light of life. –John 8:12

On the same day Jesus healed Peter’s mother-in-law, He went on to heal many others “that evening after sunset” (Mk 1:32). As night falls quickly in Israel, we can imagine the dark street dotted with dozens of oil lamps as “the whole town gathered at the door” (v 33).

On a radically different occasion, when Jesus was arrested in an olive grove, the scene was lit more luridly by a crowd “carrying torches, lanterns, and weapons” (Jn 18:3).

Though they had no electricity or candles, night didn’t stop these people. Candles had originated in China around 200 BC but did not appear in the Middel East until the fifth century, probably due to the abundance of another excellent light source: olive oil. Even the menorah in the Temple was not a candlestick but a seven-branched stand for oil-burning lamps. The menorah was kept lit all night long, a practice not uncommon with household lamps as well. So inexpensive was olive oil that even in tombs a lamp might be kept burning as a symbol of life. All the more reason why, in the parable of the ten virgins, the five foolish ones who took no extra oil for their lamps really were foolish. It was like going on a long hike without a water bottle. The fact that fire had to be made by rubbing sticks together or striking stones was incentive enough to keep your lamp burning.

Many lamps from Jesus’ day have survived. They could be made of stone or metal, but most often of pottery. While this book will not say much about pottery, let’s not overlook that clay is a form of stone. The photograph shows a style of lamp known as ‘Herodian’ that was commonly used in first century Judea: an oval-shaped bowl with a perforated spout for holding a flax wick, one end of which floated in oil. It gave off a sweet scent and could be held in the palm of the hand. A lantern was simply a larger oil lamp with a handle, while a torch was made of linen rags wrapped around a core of iron or clay and moistened periodically with oil. 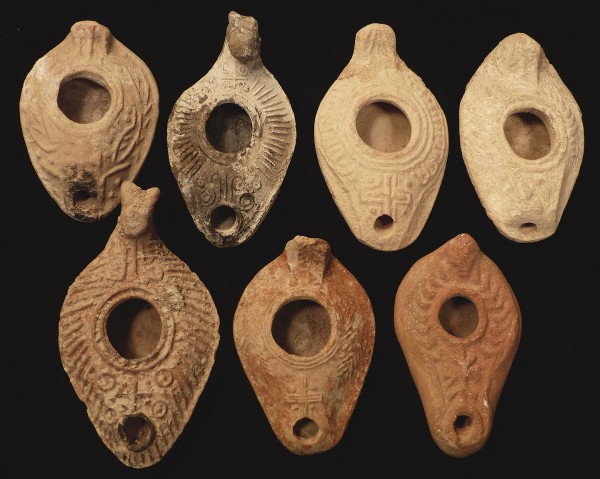 Lamps are a powerful symbol throughout the Bible: “Your word is a lamp to my feet” (Ps 119:105). Jesus referred to them several times, most intriguingly in Matthew 6:22—“The eye is the lamp of the body”—a saying that provokes the question: What is it inside of us that burns?

One night, gazing up into a starry sky from a deserted ocean beach, I contemplated how much light there is in the universe. There was no moon, but the breaking waves were dressed in coruscant white crinoline lit solely by starlight. While our one star, the sun, bathes our planet in such copious light, yet there are trillions of other stars out there blazing away, gushing out light endlessly, with more stars being formed all the time as others die. Where does it come from, all this light?

Considering this, is it so hard to believe in a heaven of limitless light that goes on and on forever? That “city does not need the sun or the moon to shine on it, for the glory of God gives it light, and the Lamb is its lamp” (Rev. 21:23). The real source of light, it turns out, is not “out there” somewhere—it is in me. As a believer in Christ, “the light of the world”—of all worlds—is within me, welling up continually. The Emperor Nero lit his garden parties with the carcasses of burning Christians. But God too has His human torches, set alight for all eternity with a fire that does not scorch but gives “the light of life.” One day the universe will end; the very stars will plummet from the sky. But the source of light, alive in me, will never die.