If you’re a fan of Star Trek, have you ever wondered where Spock got the idea for his famous Vulcan salute, accompanied by the phrase, “Live long and prosper”? Like everything else important in life, it’s from the Bible. Here’s the story.

When Leonard Nimoy (the actor who played Spock) was a little boy, his father took him to a Jewish synagogue. The young Leonard was much impressed by the moment when the Cohanim—the priestly descendants of Aaron—pronounced the Benediction:

This blessing, Leonard reported, was neither spoken nor sung, but delivered in a chant so raucously hairraising that he never forgot the experience. Though his father had told him to bow his head, close his eyes, and refrain from looking, the boy couldn’t help but peek, and what he saw was the Cohanim with their hands raised over the congregation and their fingers spread in a peculiar fashion. 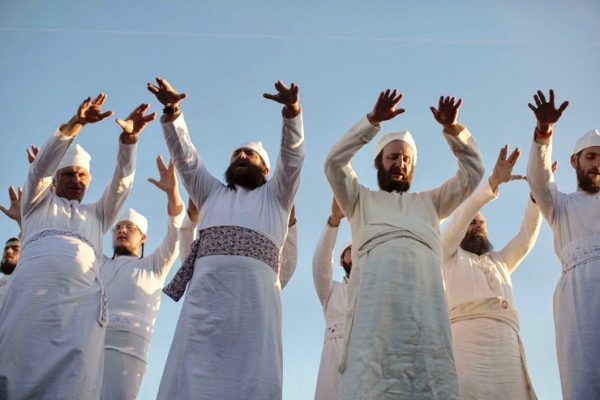 Years later, in a Star Trek episode in which Spock returned to his home planet, Nimoy hit upon that hand gesture as an appropriately quirky Vulcan greeting. As for the phrase “Live long and prosper,” it’s a short form of Deuteronomy 5:33: “Walk in obedience to all that the Lord your God has commanded you, so that you may live and prosper and prolong your days in the land that you will possess.”

To this day, when the Aaronic Benediction is pronounced in a Jewish synagogue, both chanters and congregation cover their faces, because the Shekhinah—the glory of God—is believed to shine out from between the spread fingers of the Cohanim, in keeping with Song of Songs 2:9:

Behold, there He stands
behind our wall,
gazing from our windows,
peering through the lattice.

The gesture itself imitates the Hebrew letter Shin, the first letter of Shekhinah, and also of Shalom (peace), and most importantly of the Most Holy Name, Shaddai. Among Jews this name is forbidden to be spoken aloud, except on one occasion—during the Aaronic Benediction, when it is voiced three times by the Cohanim. Thus, in the words of Numbers 6:27, “So shall they put My name upon the people of Israel, and I will bless them.”

This scene is described more fully in the book of Sirach 50:20:

This was the high point of the three major festivals which every Old Testament Jew was encouraged to attend in Jerusalem: Passover, Pentecost, and Tabernacles. It was, and still is, the most important moment in the Jewish service, indeed in all of Jewish life: the one time when the name of the LORD is finally permitted to be spoken aloud, in the form of an awesome blessing.

Perhaps this is the proper way to keep the Third Commandment: You shall not take the name of the LORD your God in vain. Imagine, today, among Christians, if the name of God were forbidden to be spoken, except once in the course of a church service. Maybe more people would go to church?