Part of my quiet time every morning is given to reading a short section of some devotional book. Recently I’ve deeply enjoyed David McLaughlan’s No Ordinary People: The Unknown Men & Women of the Bible.

McLaughlan’s thesis reminds me of C.S. Lewis’s famous statement in “The Weight of Glory”: “There are no ordinary people. You have never talked to a mere mortal…. Next to the Blessed Sacrament itself, your neighbor is the holiest object presented to your senses.”

McLaughlan’s focus is on the ordinary people in the Bible, and paradoxically he points out how important they all are. Indeed the history of salvation could not be told without them. For as in secular history, if it was really all just about kings and conquerors, how sterile that would be! 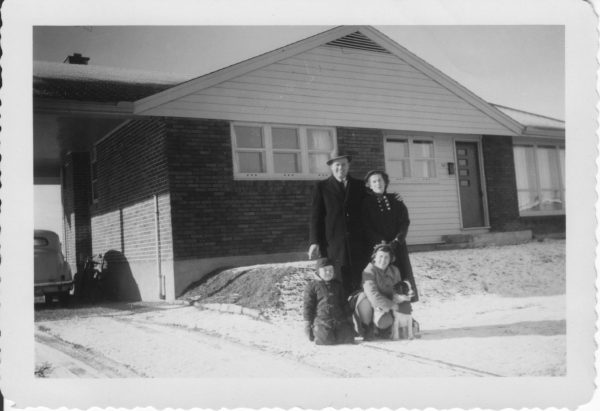 Here’s an ordinary family—my own back in 1960. That’s me with my eyes closed, Dad, Mom, sister Pat, and Freckles (a very ordinary dog)

“The named people we read about in the Bible,” writes McLaughlan, “the movers and shakers, are all very necessary, but they are the exceptions.” What about all the unnamed ones who are mentioned in passing—for example, the 3000 converts on the day of Pentecost? The great majority  of them “never made headlines, they never shook the establishment; they simply lived godly lives, raised godly children, and tried their best to be the men and women their Creator meant them to be. It would be wrong to expect them to become the equivalent of first-century rock stars. They were merely one sentence in biblical history—but they were the people the Lord was sent to earth to save. As are you.”

Here are some other snapshots from the book:

Consider “The Boy Who Gave His Lunch”: “He is a pivotal character in one of the greatest stories ever told, but no one knows his name. In three of the four gospels that tell the story, he isn’t even mentioned. Only John tells us that Jesus fed five thousand people with one little boy’s lunch.”

Or how about “The Servant of Naaman’s Wife” (the one who advised him to seek Elisha for healing): “She would not have known that the story of what happened next would be told for centuries, or that she would hardly be noticed in that story, lost in the shadows of a king, a great commander, and one of the greatest prophets.”

Or what about the unidentified man who helps Joseph find his brothers in Genesis 37:15? Why is he mentioned at all? Why didn’t the storyteller simply skip this incident? Or what about the “Host of the Last Supper—An Invisible Servant.”

Included in McLaughlan’s book are a multitude of other ordinary folks, such as the Witch of Endor, Lot’s Wife, Jephthah’s Daughter, Paul’s Nephew. Each of these easily unnoticed lives is given a full two-page chapter, complete with a focusing thought and questions for reflection.

How many of us waste time wishing we could be greater or more effective? Reading this book, I kept reflecting on my own ordinariness, and how, as with the boy who shared his lunch with Jesus, God is capable of producing awesome results from the smallest acts of apparently ‘insignificant’ people.

Next Post:  A Light Has Dawned: Meditations on Advent and Christmas