“Things that cause people to sin are bound to come, but woe to that person through whom they come. It would be better for him to be thrown into the sea with a millstone tied around his neck than for him to cause one of these little ones to sin.” –Luke 17:2

As Jesus pronounced these words, He may have been looking at this very millstone pictured in the photograph. 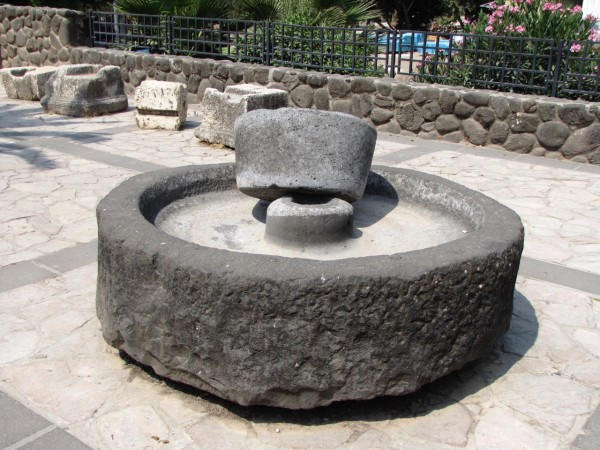 It’s located in Capernaum, just a block or two from the remains of Peter’s house by the Sea of Galilee. Did Jesus, I wonder, have a particular person in mind? Or maybe some item He’d just heard on the news?

The day I began writing this chapter, May 7, 2013, I happened to hear a news story about three young women who had been kidnapped ten years before as teenagers and imprisoned and abused for all that time in a house on a surburban street in Cleveland. They had just escaped.

What should be done to the man who did this to these girls? Drowning in the depths of the sea with a millstone around the neck does not seem adequate.

Jesus agrees. He says that those who do such things will receive a punishment worse—far worse—than death.

Most people today do not believe Him. Even for many Christians, hell has lost the power it once held. Books like 90 Minutes in Heaven have sold millions, but who has read 23 Minutes in Hell? True, the idea of eternal suffering is hard to fathom. But if heaven goes on and on forever, why shouldn’t hell? We are eternal creatures, whose choices and actions have eternal consequences. There is no planned obsolescence for humanity.

Isn’t this our great glory? Take away our eternal destiny, whether for heaven or for hell, and we are tragically cheapened, robbed of the image of God. Often the argument is made that while hell may be real, we cannot know the name of anyone there. But we do know the name of one permanent resident: Judas Iscariot, “the one doomed to destruction” (Jn 17:12). As the final verse of Isaiah states, “Their worm will not die, nor will their fire be quenched, and they will be loathsome to all mankind.”

Do we think people in hell should be given another chance? But they are in hell precisely because another chance—a million other chances—would make no difference. They have already made their eternal choice, just as believers have chosen to love God forever. To compel someone who does not love God to live eternally in God’s presence would be crueler than hell.

This is not to say that the doctrine of an eternal hell is entirely reasonable. But neither is it reasonable for a man to keep three girls locked up for ten years, utter victims of his heinous pleasures. Why do we expect God to be reasonable when we are not? We reason very well in the abstract, but when it comes to the fundamentals of how we live—the actual content of our thoughts, words, and actions—we are in tragic disarray. As sin is not reasonable, neither is the answer to sin, which is grace, nor the punishment for unrepented sin, which is hell.

Because eternal realities transcend the limits of our minds, it requires faith to accept them. If we find it hard to believe in hell, it’s only because there’s nothing in it for us. Unlike heaven, it’s not worth our while to give it credence.

As Christians we believe we are saved—but saved from what? From death? Yet if death is merely annihilation, is that so terrible? Yes, the loss of this beautiful life is greatly to be mourned, but it’s not so bad a fate as everlasting damnation. Surely that is what we need saving from. If there is no millstone of sin around our necks, and no endless, demon-infested pit over which we are dangling, then salvation is a hoax and Jesus Christ lived and died in vain. For those who believe, isn’t there some comfort in knowing we have a God who plays for keeps?

In the words of C.S. Lewis, “The answer to all those who object to the doctrine of hell, is itself a question: ‘What are you asking God to do?’ To wipe out their past sins and, at all costs, to give them a fresh start, smoothing every difficulty and offering every miraculous help? But He has done so, on Calvary. To forgive them? They will not be forgiven. To leave them alone? Alas, I am afraid that is what he does.” (1)

Next Week:  The Magdala Stone