My friend Chris felt his life hadn’t amounted to much. As a child he’d dreamed of accomplishing some great work and leaving his mark on the world. How that might happen, he wasn’t sure, but he had a sense of destiny.

Nearly six decades later, looking back, he’d spent his life in a generally anonymous, unremarkable career that taxed all his energy but achieved (as he saw it) little impact. He wasn’t bitter or miserable about this, just deeply sad for having lived such an ordinary life. A man of great faith, he found comfort in the Lord, yet the disappointment remained. He had already written his epitaph: I was no one of consequence, but I knew One of consequence, and that made all the difference …

This year Chris followed a daily devotional for the season of Lent. One of the meditations was based on the shortest verse in the Bible, “Jesus wept” (John 11:35). The writer observed that every life has its share of grief, wounds, failures. Lent was a time, it was suggested, for reviewing these disappointments and seeing what the Lord might have to say about them. Perhaps He took a different view of things? The reader was challenged to regard these sorrows as “pools of tears,” and to take some time to sit beside each pool, contemplating its sadness, and then ask the Lord for His response.

Well, thought Chris, I have plenty of pools in my life. I’m going to try this and see what happens.

It wasn’t hard for him to decide which pool of tears to sit beside first: his vast sense of failure at not having accomplished anything of significance in the world. This pool was more like a great lake, and Chris couldn’t help thinking of Alice in Wonderland, shrunk to the size of a mouse and swimming in a sea of tears. Contemplating his grief, Chris told God how miserable and frustrated he felt, half-wondering whether the Lord might really respond to him. 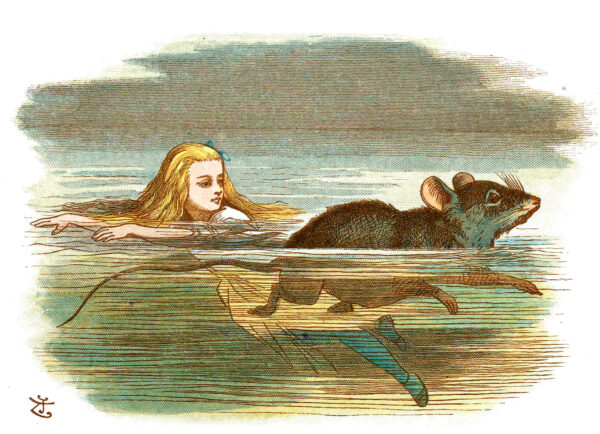 Alice in Wonderland in the Pool of Tears

Suddenly he looked out the window and there, closer than he could believe, was a magnificent eagle flying by. A most unusual sight! Immediately Chris felt that this regal bird had been sent to him by God in direct answer to his prayer. His heart melted, and now he cried a different kind of tears—tears of joy, relief, astonishment. Chris’s ordinary life, he felt God say, was something great and extraordinary after all. Perhaps he couldn’t see it now, but God saw it that way, and one day Chris would, too. For now, it was enough for him simply to trust.

So striking was this event that Chris, in the habit of keeping an audio prayer diary, at once preserved his thoughts in a voice recording. Much later that day, he decided to replay this recording while driving home from work. As soon as he came to the part where he described his amazement at seeing the eagle, and heard the catch in his voice, he happened to look up and there, once again, right in front of his windshield, was an eagle! This time the bird didn’t just fly past once, but actually turned back and circled directly over his car.

Was Chris astounded? Awed? Struck with gratitude to the core of his being?

Was his pool of tears entirely dried up? Well, perhaps not. We don’t live on top of the world; we live, for the most part, in the valley, where by far the largest part of life is as ordinary as what birdwatchers call an LBJ: a little brown job. But one day the angels will descend and pick up that tiny, nondescript bird and lift it up to heaven where, as Bruce Cockburn sang in “All the Diamonds,” it will shine “like a crystal swan in a sky of suns.”

Next Post:  God and Evil: Is There Any Comparison?

Posted in Blog and tagged Alice in Wonderland, Answers to Prayer, Ordinary Life, Pool of Tears.