The term Holy Grail refers to the cup used by Jesus to institute the eucharist at the Last Supper. If you’re like me, any claim that this cup might still exist produces skepticism. Isn’t this just a knights-of-the-round-table legend?

But wait. Another claim made for the Grail is that it was the cup used by Joseph of Arimathea to collect some of Jesus’ blood on Calvary. This story strikes me as highly implausible. What does seem possible, however, is that this same Joseph (or another wealthy disciple) may have been the host who provided Jesus with the Upper Room, along with its tableware, for celebrating the Passover. Considering the care Joseph took to claim Jesus’ body after the crucifixion, and to inter the Lord in his own tomb, might he not also have preserved the cup from the Last Supper?

As it turns out, a strong oral tradition maintains that this cup did survive, not merely as an object of quest for Arthurian knights, but as a cherished relic of the Christian Church. Yes, if one collected all the nails with which Jesus was crucified, one could build a house. And when it comes to the Holy Grail, certainly numerous candidates for this title exist. Only one, however, has any academic credentials: the Holy Chalice of Valencia, located today in a side chapel of the Cathedral of Valencia in Spain. Is this the true Holy Grail? According to scholar Janice Bennett, “We cannot know with absolute certainty, but the Church has always venerated it as such, and history, tradition, legend, and archaeology all point to its authenticity.” 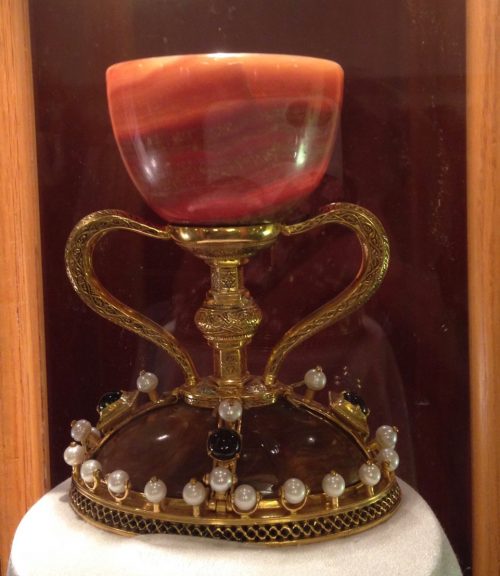 The Holy Chalice of Valencia

The bottom portion of this chalice—the golden stem and handles, the gemstones, and the base of dark chalcedony—is a medieval accretion. But the beautiful, pellucid upper bowl, made of dark red Middle Eastern agate, has been authenticated as dating from the first century or earlier. Tradition has it that the first twenty-two popes, from Peter to Sixtus II in 258 AD, used this very chalice in celebrating mass, as have modern popes including John Paul II and Benedict. When the Roman church underwent persecution in the time of Sixtus, it was forced to surrender its treasures. In order to save the chalice, Sixtus entrusted it to his deacon, a Spaniard named Laurence, who in turn, when faced with martyrdom, arranged for the cup to be sent to Spain where it survives today. This latter part of the story is attested by two early manuscripts, one from the sixth century which alludes to a third century letter (now lost) written by Saint Laurence himself.

Further evidence for this cup’s authenticity may be seen in the long trail, from Saint Laurence on, of those who have sacrificed their lives in order to protect it. The chalice has survived everything from Roman persecution and Muslim invasion to the Spanish Civil War and the burning of the Cathedral of Valencia, in every case being spirited away for safekeeping to an extraordinary variety of hiding places. Behind such heroic actions lies the most convincing of testimonies: that of devoted faith.

One thesis of this book is that God created the enduring material of rock with the deliberate intent that it might witness centuries later to significant events in the earthly life of His Son. Of all the artifacts discussed in these pages, perhaps none is more significant than the chalice of blood-red stone that Jesus held aloft in His own hands on the night before He died, saying, “This cup is the new covenant in my blood, which is poured out for you” (Lk 22:20).