During November 2002, over 100,000 visitors to the Royal Ontario Museum in Toronto lined up for hours to view an old bone box. 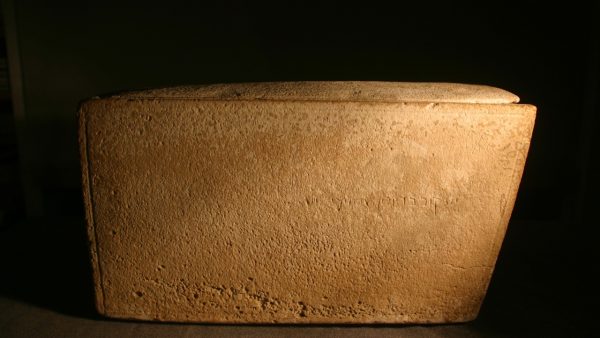 The Aramaic inscription: “James, son of Joseph, brother of Jesus.”

This newly-discovered ossuary (from Latin os, meaning bone) had made front page headlines around the world. Though the box itself was empty, on the outside was an extremely interesting one-line inscription in Aramaic: James, Son of Joseph, Brother of Jesus. If authentic, this artifact is the only tangible, non-textual link to Jesus of Nazareth and His family, making it potentially the most thrilling discovery in the entire field of biblical archaeology.

For a short period of time, from about 20 BC to 70 AD, Jews in Jerusalem practised an unusual form of secondary burial. Bodies were first laid on ledges in family cave tombs; then, after about a year of decomposition, to make room for more burials the dry bones were collected in a box big enough to contain the longest bone, the femur. Normally these boxes were made of chalk limestone—which, incidentally, is composed of calcium carbonate, the same substance that composes bones. Often the name of the deceased was inscribed on the box, and about 250 such inscribed ossuaries have been found, among them the ossuary of Caiaphas, high priest from 18-36 AD, who presided over the trial of Jesus. And now we have one declaring itself to have held the bones of Jesus’ brother, James.

This James is not to be confused with the two disciples named James, usually identified as James the Greater and James the Lesser. Rather, the James in question is the one called by Paul “the Lord’s brother” (Gal 1:19), who like Paul saw the resurrected Christ (1 Cor 15:7). On this basis (rather than by being one of the twelve) he was recognized as an Apostle and a leader of the Jerusalem church, and he is thought to have written the New Testament letter of James. He was martyred by being hurled from the pinnacle of the Temple, and his bones, having been moved in the eighth century, now reside in the Cathedral of St. James in Jerusalem.

Is the James of the ossuary inscription the same person as the James of scripture? James, Joseph, and Jesus were all common names in first century Jerusalem. According to a statistical analysis based on the frequency of these names and the city’s estimated population, there is about a 75% chance that the James of the inscription is the brother of Jesus Christ. (Bear in mind that some traditions interpret the word brother as meaning cousin.)

But is the inscription authentic? It is deemed so by at least two of the world’s leading paleographers, and no comparable expert has published evidence to the contrary. The ossuary has also passed exacting linguistic and scientific analysis.

Nevertheless, the initial excitement surrounding this discovery quickly degenerated into a snarl of controversy. Since 2002, not only has the famous ossuary never again been exhibited in public, but it became the focus of a sensational ten-year-long investigation and forgery trial in Israel. Finally, in 2012, the artifact’s owner was acquitted of all charges of forgery.

So is the James Ossuary, after all, the real thing? Not necessarily. While years of expert testimony and study could not establish the inscription on the box as fake, this is not the same as declaring it authentic. So the debate rages on and the ossuary remains under custody with the Israel Antiquities Authority. One has to wonder if what has really been on trial in Jerusalem is not an old bone box, but, as always, Jesus Himself.

Next Week:  The Holy Grail