This week, a guest editorial by Arthur Enns, a retired pastor and former healthcare administrator, who is writing a book on the sovereignty of God. Here is his reflection on the timely topic of “Sovereignty and Racism.”

Not since airliners crashed into New York’s Twin Towers on 9/11 had an image so impacted America.

It was the picture of a white police officer kneeling on the neck of a handcuffed African American man—a brutal act that lasted for almost nine minutes until George Floyd was dead.

Sadly, the riots that followed in cities across the U.S. not only destroyed inner city neighborhoods, but also diverted attention from what had triggered the protests—racism.

Growing up in the 1950s and 60s in British Columbia, Canada, I thought racism was something other countries dealt with, especially after reading books like Why We Can’t Wait by Martin Luther King, Jr. and Black Like Me by John Howard Griffin. 1

That impression was reinforced years later when I attended a Promise Keepers conference for 80,000 men at the Seattle Kingdome. During one session, the speaker shared a powerful message and then invited men who were prepared to renounce their racist attitudes to come forward. I was shocked to see men by the thousands streaming to the front for confession and prayer.

Fast-forward to a conversation among family and friends just a few years ago on Canada Day. When someone referred to the beginning of our country’s history in the 1500s, someone else challenged it, pointing out that those dates only referred to the arrival of Europeans. The original inhabitants of this land had lived here for thousands of years. I’m embarrassed to admit that this was an “aha” moment for me.

Of course, I remembered those facts from school, but the mindset of what constituted our history’s starting point revealed an unconscious bias. The Indigenous peoples somehow did not count. 2

Speaking of mindset, have you ever wondered why north is always up on maps and globes? From a strictly scientific standpoint, it would be just as correct to have south on top, as any astronaut circling the earth could confirm.

North is up mainly because European superpowers dominated much of the known world in the 16th century, and mapmakers obligingly put Europe—and the rest of the northern hemisphere—on top. 3

Have we inherited that mindset without realizing it? Do we think God looks at the earth with the same orientation we have arbitrarily assigned to it?

The truth is: all of us are affected by the biases we’ve grown up in and the perspectives we’ve been taught. Which is why it’s vitally important to approach a subject like racism from God’s frame of reference.

If God is sovereign, then it’s his viewpoint that’s important, not our biases—nor our reactions to those biases, whether guilt or a “political correctness” that’s focused on currying favor more than fostering respect.

And what is God’s viewpoint? An all-important clue is found in the creation account:

Nature is filled with displays of beauty and power. But only people were created in God’s own image. Men and women represent the pinnacle of his creation. 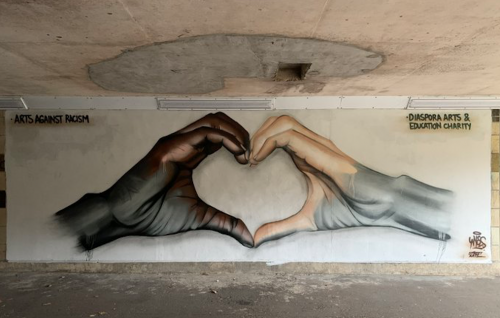 It’s important to note that the “image of God” is generally understood to refer to non-physical attributes such as the capacity to think, communicate, and make decisions; a spiritual core and a moral code; and the ability to create, especially in terms of artistry and invention.

Still, do we have any idea of what Adam and Eve might have looked like? Perhaps. Most scientists believe the first (modern) humans lived in Africa, which suggests they didn’t resemble the pictures we may have seen in Sunday School:

It shouldn’t really matter which race or ethnic group the first humans looked like, since God eventually chose to create a wide array of people types. He really does value variety, diversity, the proverbial mixed bag.

Anyone doubting that should consider the millions of species he created. There are, for example, about 5,000 different types of frogs!

The point? God demonstrates his glory in the diversity of things, plants, animals, and people he creates. Since that is a key value for our Creator, we creatures need to follow suit. It’s that simple.

To criticize his handiwork, especially people made in his own image, is like disparaging Leonardo da Vinci’s Mona Lisa or Michelangelo’s David—only worse.

Racism is telling people they are inferior—worth less than others. It damages them at a deep level of their soul.

But even more outrageous is how it insults Almighty God— basically telling him he did a poor job of creating humans, or that we don’t like his image in certain people.

Viewed in that light, racism is worse than even a radical activist could imagine. Which means we need God’s help. So we pray these words of David from the Psalms:

But who can discern their own errors?
Forgive my hidden faults. 6
Show me your ways, Lord,
teach me your paths. 7

Only the God who deliberately made people with differences can show us how to relate to and honor one another—and thus honor his sovereignty as Creator.

Next Post:  C.S. Lewis in Heaven: A Visit to the Real Narnia

Posted in Books in Progress, Stories and Excerpts and tagged Image of God, Racism.