As we enter into the season of Lent, may I remind you of my book Jesus: His Story In Stone, whose one-page devotional chapters on the life of Christ make a good companion for the journey toward Easter. Here’s a sample chapter, about Jesus’ time in the wilderness.

The devil took Him to a very high mountain and showed Him all the kingdoms of the world and their splendor (Mt 4:8).

It looks like a little train hugging the cliff face, but actually that’s a monastery way up there, to which one can travel by cable car. Tradition holds that Christ’s forty days of fasting and temptation in the wilderness took place on this mountain, called Quarantal (from quarantena meaning forty). 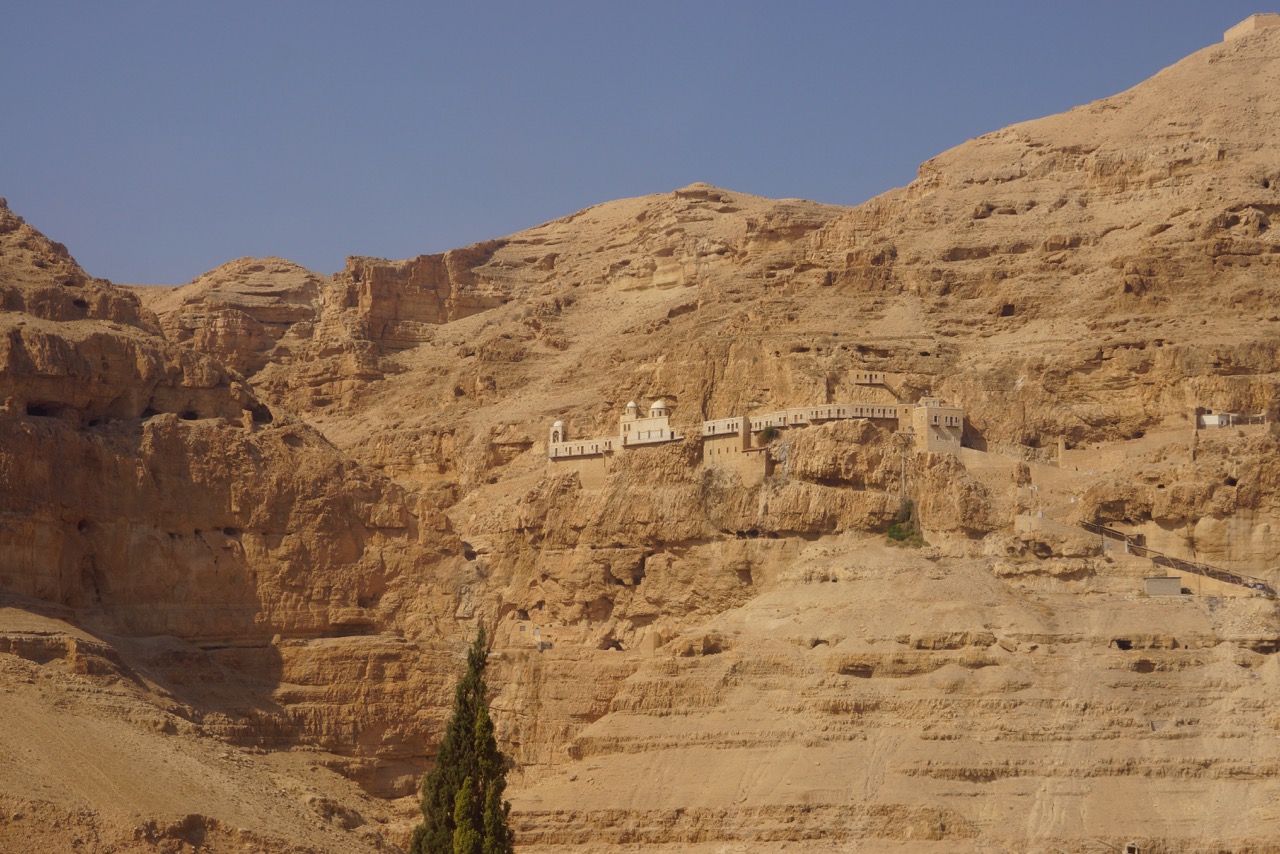 Mount Quarantal was first settled by fourth-century Greek monks who lived in its caves. In the twelfth century the Knights Templar built a fortress on the summit. Lower down, the Monastery of Quarantal, established by the Greek Orthodox in 1905, contains the Grotto of the Temptation where Jesus is thought to have lived and prayed during the forty days.

Personally, I think He would have roamed around rather than staying in one place. He didn’t go to the wilderness to hide out, and it’s unlikely He would have passed the entire time so close to the town of Jericho, just a mile away. This period, remember, immediately followed His baptism, which probably occurred about six miles southeast of Jericho near Al Maghtas (which means baptism or immersion in Arabic). From there, isn’t it likely He followed the river further south toward the Dead Sea and disappeared into the wilderness of Judah? For this is where David had hidden as a fugitive from Saul. Speculation aside, all scripture states is that towards the end of the forty days “the devil took Jesus to a very high mountain,” and this may well have been Quarantal.

How do we know anything at all about Christ’s temptation in the wilderness? That is, how did the gospel writers know anything? Apart from angels and demons, Jesus was all alone. The story is fascinating for its intimate insight into the Lord’s personal spiritual life. At other times we’re told that He “often withdrew to lonely places and prayed” (Lk 5:16), but we never learn the content of those prayers. On just one other occasion we see Him alone at prayer, in the Garden of Gethsemane. Although the nearby disciples fell asleep, it’s still possible they overheard a portion of His prayers, as He was known to offer up “prayers and petitions with loud cries and tears” (Heb 5:7).

Only in the account of the wilderness temptations do we see directly into an episode of Jesus’ life so private that only He could have known about it. We have a record, therefore, solely because He must have told someone—either His disciples, or another close friend such as Lazarus. As for John, “the disciple Jesus loved,” he alone of the gospel writers, curiously, does not mention the temptation story.

But let’s return to the mountain—this unbearably hot, desolate moonscape where the Son of God, famished, utterly spent, weak beyond imagining, stands alone on the summit, tottering, as Satan whispers in His ear, “All this I will give You if You will bow down and worship me” (Mt 4:9). The only other comparable moment in the gospels is when Jesus hangs on the cross and screams, “My God, My God, why have You forsaken Me?” (Mt 27:46)

This is not what He says in the desert. Instead He cries, “Away from Me, Satan! For it is written, ‘Worship the Lord your God, and serve Him only” (4:10). What is the difference between these two scenes? Only this: One comes at the beginning of His ministry, the other at the end. Although human enemies figured prominently in the crucifixion, as they did not in the wilderness, for Christ the one great enemy, the one who needed ultimate trouncing, was always the devil. On the Mountain of Quarantal Jesus was gathering strength for His final spiritual battle on another mountain: Calvary.

Jesus: His Story In Stone is available in paperback, hardcover, or as an ebook.

Next Post:  The Fire of Joy: Thomas Merton on Happiness

Posted in Stories and Excerpts and tagged Jericho, Jesus: His Story In Stone, Lent, Temptation, Wilderness.