Suddenly a great company of the heavenly host appeared with the angel, praising God and saying, “Glory to God in the highest!” –Luke 1:13-14

It’s not a pretty place. In fact it’s pretty garish. But as I emerged from the cave where Jesus is said to have been born, I felt born again. 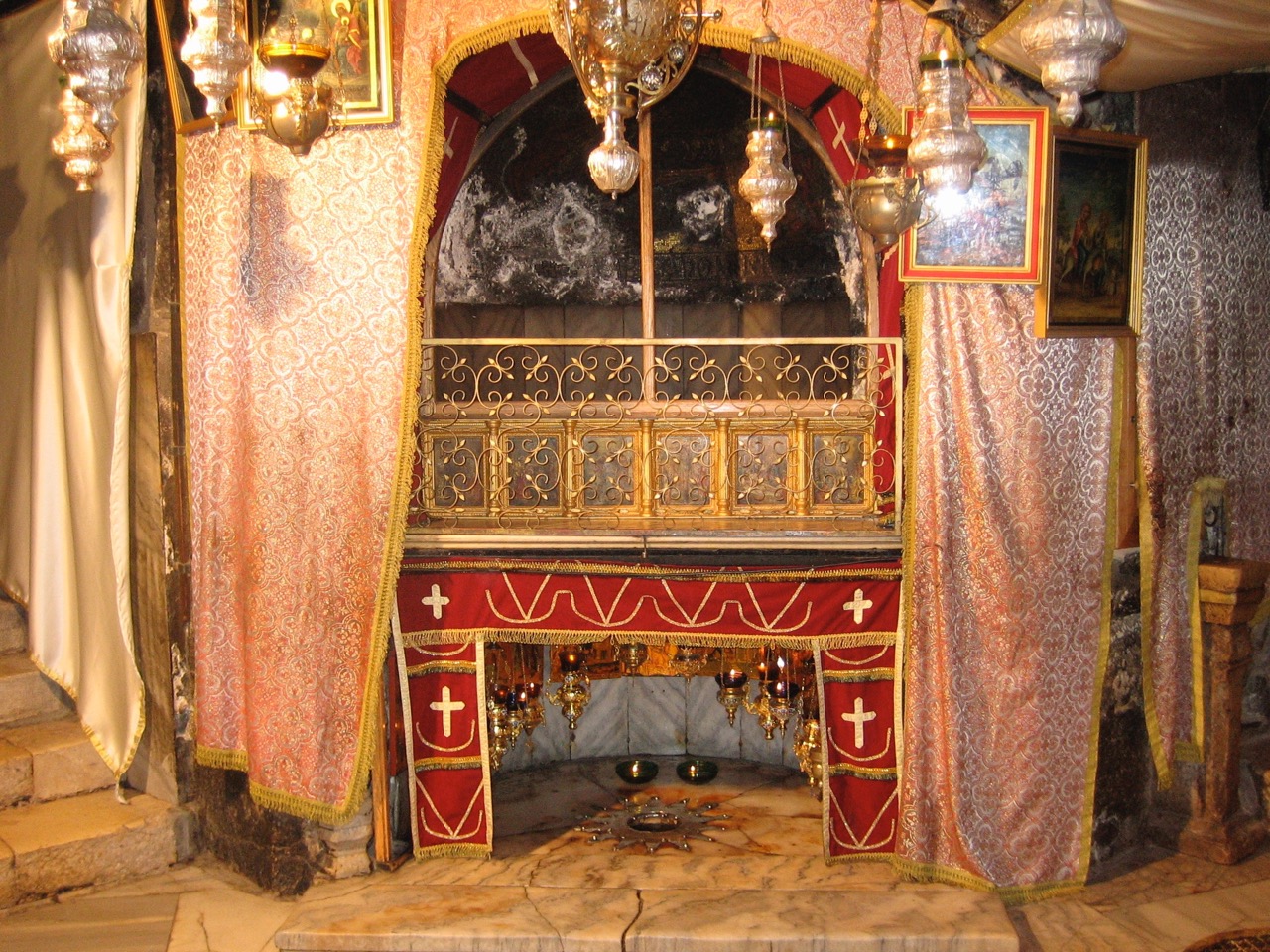 Located directly below the high altar of the Basilica of the Nativity in Bethlehem, at the point of intersection between the nave and the transepts, the cave of the nativity doesn’t look like a cave. The original rough rock walls have been smoothed over and obscured by marble slabbing and leathery, fireproof draperies. The actual spot of the most famous birth in history is marked by a fourteen-pointed silver star set in a white marble floor surrounded by a plethora of silver oil lamps. As you stand before it, behind you is another alcove, much simpler, where the manger is thought to have stood.

I know: It’s hard to believe. But the association of this site with the birth of Jesus is of great antiquity. As early as the second century Justin Martyr testified to its authenticity, as did Origen in the third century. Following a Jewish revolt in 132 AD, the Emperor Hadrian, determined to suppress any further messianic uprisings, paganized all the Judeo-Christian holy sites. He turned the Bethlehem grotto into a shrine dedicated to the god Adonis and planted a sacred grove all around it. But when Origen visited a century later he wrote that the pagans themselves “tell everyone who will listen that in this grotto a certain Jesus was born whom the Christians revere.”

In 385 AD St. Jerome came to live in Bethlehem, calling it “the most venerable place in the world.” His own cave, where he lived and produced the Vulgate (the first Latin translation of the Bible), can still be seen beneath the neighboring Church of St. Catherine.

But it seems to me the lineage of this place goes back even further—all the way to the first witnesses of Christ’s birth, the shepherds, who “spread the word concerning what had been told them about this child, and all who heard it were amazed” (Lk 2:17-8). Surely the shepherds’ report specified the exact place where this marvel occurred, and with so many people in the know, wouldn’t a local tradition about the birthplace have arisen?

This book is about stone, which Jesus was going to see a lot of in His life. If He began in a cave, He also ended (nearly) in a cave, and in between there were other caves, from the Grotto of the Temptation in Jericho to the Grotto of the Agony in Jerusalem. In a way, all the great stone cathedrals and churches and chapels that have since been erected in His name are caves, all echoing the original stone enclosure of the Savior’s birth.

To really experience this birth cave, however, we need to let in some light. Strip away the asbestos hangings, the gaudy lamps, the altars, the trinkets. Picture walls of bare rock, and then imagine lifting away the whole massive basilica above as simply as a man doffing his hat. Finally, open up the cave to the eastern sky, just as it probably was two millennia ago.

Now we can see stars, and we can look across to the hillside that is still known today as the Shepherds’ Field. Do you see that one star which, though not huge, somehow shines more beautifully than all the rest? And do you see the glow that is starting to spread and shimmer across the heavens, and do you hear the ghostly humming, that sizzling sound like the crackle of northern lights, or like fish frying on a charcoal fire? Could it be the voices of angels…?