I tell you that you are Peter, and on this rock I will build My church, and the gates of Hades will not overcome it. –Mt 16:18

Follow the Jordan River north from Galilee up to the Golan Heights and you’ll come to the river’s source (one of three) at a place called Banias at the foot of Mount Hermon. 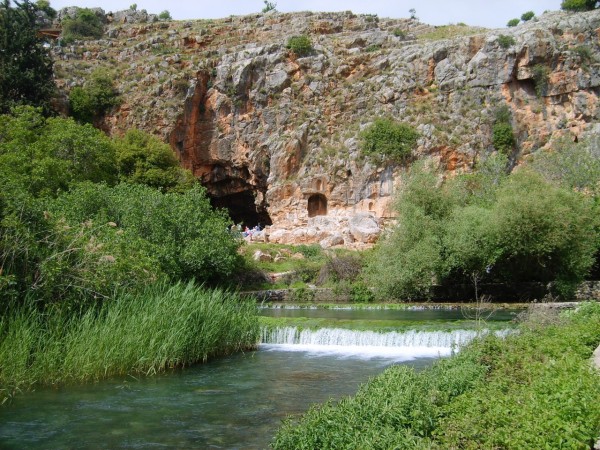 The Cave of Pan at Banias

In ancient times this was called Paneas, after Pan, the goat-footed Greek god associated with nature, fertility, and carnal excess. See the dark opening in the cliff face near the center of the photograph? This was the Cave of Pan, believed to be the doorway to the underworld where fertility gods lived in winter, returning to earth each spring on the subterranean stream that formerly gushed from the cave mouth. To the right of the cave are several niches where pagan statues would have stood. Today this is an archaeological site, but in Jesus’ time it was an active center of pagan worship with a temple, courtyards, and shrines—the focal point of the romanesque city of Caesarea Philippi. Engaging in orgies of prostitution, bestiality, and human sacrifice, pilgrims and locals (including Jews who had a long history of combining such rites with Yahweh worship) would entice their gods to return from the winter underworld to renew the earth.

Here, to this red-light district where dark forces of chaos simmered underground, Jesus brought His disciples to ask them the question, “Who do people say I am?” And a further question: “What about you? Who do you say I am?” (Mk 8:27, 29) Peter replied, “You are the Christ, the Son of the living God” (Mt 16:16), to which Jesus responded with the words at the head of this chapter.

Peter is especially interesting in the context of this book because his name—the name Jesus gave him—means rock. (In English the root yields words such as petrology and petroglyph.) Today Jesus might have called Peter ‘Rocky’—a tough, no-nonsense handle for a guy it would be best not to mess with. Ananias and Sapphira learned this the hard way in Acts 5 when they lied to Peter and ended up being struck dead at his feet.

Naming is a highly intimate and powerful act. Normally a name is bestowed when a person emerges from another sort of cave, the womb. Indeed Peter’s renaming was a rebirth, a “born again” experience of emerging from darkness into the light of belief in Christ. He must have been surprised—awakened—by his own profession of faith. Note too that naming is a privilege normally reserved to parents. Jesus’ renaming of Peter may thus be a sign of His oneness with the Father, for ultimately only God can name us: “You will be called by a new name that the mouth of the Lord will bestow” (Is 62:2). Even more to the point, God knows our true name. Jesus does not say He is giving Peter a new name, but rather, “You are Peter.”

This whole episode takes on deeper resonance when we imagine it taking place before the Cave of Pan. Jesus’ exchange with Peter is as much as to say: Pagans have gods of stone, but the Son of the living God builds not with rocks but with people, people who will not be afraid of darkness and evil but will wage war even on Hades—and win! In the next breath Jesus promises to give Peter “the keys of the kingdom of heaven” (Mt 16:19).

But the conversation is not over. Jesus goes on to predict His passion and death, and when Peter has the nerve to rebuke Him, he receives the stinging retort, “Get behind Me, Satan!” (Mt 16:23). Does Jesus perhaps point to the mouth of the cave as He turns His back?

All in all this is a most somber scene as, late in His ministry, before the door of hell, the Lord announces both His coming death and His succession plan.

Next Week:  The Transfiguration