After six days Jesus took with Him Peter, James, and John the brother of James, and led them up a high mountain. -Mt 17:1

Among the many benefits of being followers of Christ is that of expanding our vocabularly with glorious words like transfiguration. While most of us know what this means, it’s worth setting down the Oxford definition: “a complete change of form or appearance into a more beautiful or spiritual state.”

Immediately prior to this event, Peter had a revelation of who Jesus was—the Christ, the Son of the living God—and afterwards Jesus began to teach that He must go to Jerusalem to suffer and die and be resurrected. Up on the mountain He met with Moses and Elijah, who had both ended their days on earth mysteriously. Elijah was taken up to heaven in a fiery chariot (1 Ki 2:11), while Moses’s body was hidden by God (Dt 34:5-6). Did this happen so that they might appear with Jesus on the mountain? And then re-appear as the two witnesses during the tribulation (Rev 11:3-4)?

There are two possible sites for the transfiguration, Mount Hermon and Mount Tabor, both massively appropriate to our topic of significant rocks. Hermon, much larger, is a mountain cluster in the far north of Israel. One of its peaks, over 7000 feet, is the country’s highest elevation, although the summit in Syrian territory rises 2000 feet higher. Tabor, eleven miles west of the Sea of Galilee, is a 2000-foot monadnock: a small, non-volcanic mountain rising abruptly from level surroundings. 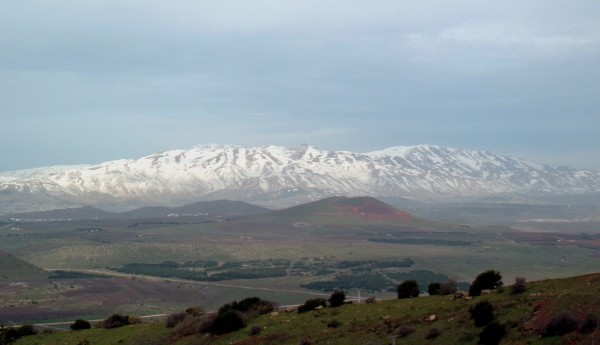 Mount Hermon: Site of the Transfiguration?

Curiously, these two mountains are coupled together in a verse of the Psalms: “Tabor and Hermon sing for joy at Your name” (89:12). But we must choose one of them as the most probable site of the transfiguration, and my vote goes to Hermon. The tradition linking Tabor to this event is very old, mentioned by Origen in the early third century as going back to apostolic days, and so it has a beautiful church on top which all the tourists visit.

However, it seems to me that scripture overrules this tradition. According to Matthew 16:13, “Jesus came to the region of Caesarea Philippi,” which is at the foot of Mount Hermon, where Peter had his revelation. Then Matthew 17 opens with the verse at the head of this chapter, beginning, “After six days …” This echoes the period of six days that Moses had to wait before going up Mount Sinai to receive the tablets of the law (Ex 24:15). No further mention of a change of location occurs until verse 22 of this chapter—“When they came together in Galilee …”—implying that the previous events had all taken place up north at Mount Hermon.

Caesarea Philippi was a fair trek from Galilee, and there seems to have been no purpose for this trip other than Jesus’ transfiguration on the highest mountain in the land. Upon descending, He healed an epileptic boy, casting out a demon that His disciples could not budge—proof in that pagan heartland that Christ’s power really did prevail against the gates of hell. Then, gazing up at the mountain itself, He said, “If you have faith as small as a mustard seed, you can say to this mountain, ‘Move from here to there’ and it will move” (17:20)—a statement carrying much more weight if applied to the massive Hermon than to Tabor.

Finally, I prefer Hermon over Tabor because, like the Sea of Galilee, no one has yet built a church on top of it. Only a ski resort. All of the Bible’s surprising images of snow derive from this region, the loveliest of which is perhaps Psalm 133:3, which says of brothers living in unity, “It is as if the dew of Hermon were falling on Mount Zion.” Here the “dew of Hermon” might be heavy dew falling on Jerusalem’s normally dry Mount Zion. But it could also be a metaphor for snow, in which the psalmist pictures one of the most beautiful sights in nature—a gentle, transfiguring snowfall.