The Holy Spirit will come upon you, and the power of the Most High will overshadow you. So the holy one to be born will be called the Son of God. (Luke 1:35)

The first rock in the life of Jesus was a cave. A cave in the house of Mary in Nazareth. 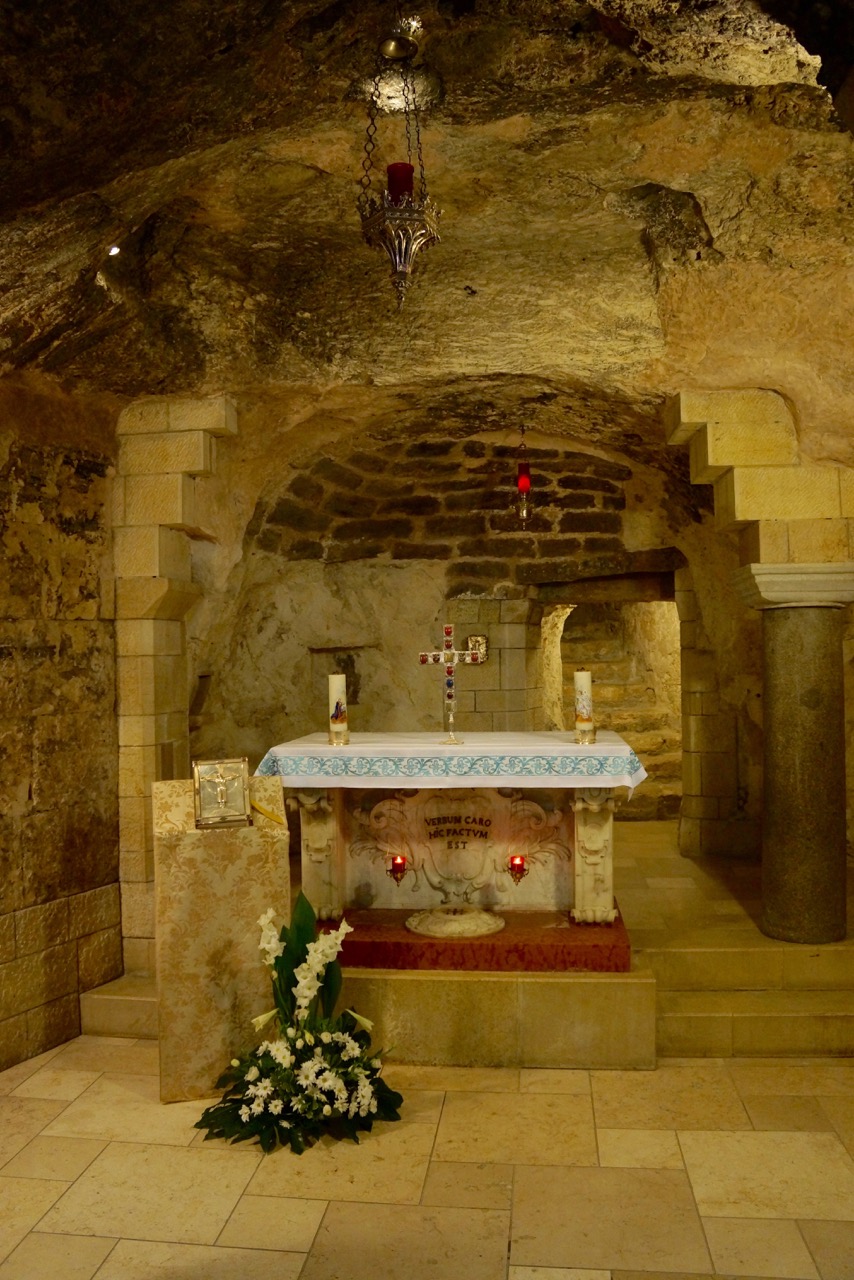 When does a human life begin? At birth? At conception? In the mind of God long before conception?

The life of Jesus Christ had no beginning. The Nicene Creed tells us He was “born of the Father before all ages.” When was that? It was no-when, outside of any when. We cannot conceive of when or how Jesus was conceived.

As to His earthly life, however, the story begins not at His birth, nor even at conception, but at the annunciation. This was when the astounding news of the impending incarnation of God broke into the life of a young woman in Nazareth.

Two different churches in present day Nazareth claim to occupy the site of the annunciation. The Greek Orthodox Church of St. Gabriel is built over the local well, based on the belief (first recorded in the non-canonical gospel The Protoevangelium of James) that the angel visited Mary while she was drawing water. The Nazareth of Jesus’ day had only about two hundred occupants, and then as now there was just one source of drinking water. Whether or not the famous event took place at this well, Mary would certainly have come here often, and the life of Jesus would have been sustained by this water, the same water that is even now piped from five hundred feet up the hill to the crypt of the Greek Orthodox Church.

The other contender for this title, the Catholic Basilica of the Annunciation, is built over the remains of a first century house, incorporating a cave, believed to be the site of Mary’s childhood home or one like it. Galilean houses of that time were simple two-room structures made of fieldstone, roofed with thatch, and often including a cave. Note in the photograph the stone steps visible in the rear corner of the grotto, as if Mary herself has just gone upstairs with a load of laundry.

The annunciation is traditionally celebrated on March 25, nine months before Christmas, suggesting that Mary’s impregnation happened within a week of the angel’s announcement. Most commentators seem to assume that the impregnation precisely coincided with Mary’s assent. Similarly, most paintings of the annunciation include the Holy Dove in the act of descending upon Mary to “overshadow” her. But would God have made love to Mary in the presence of an angel? Wouldn’t this have been an intensely private act? In any case, Mary’s assent, “Be it unto me according to Thy word” (Lk 1:38 KJV), was revolutionary, not only for her willingness to bear the Messiah but for her utter surrender to being God’s lover. Here, before the birth of Christ, was the birth of Christianity.

My favorite painting of the annunciation, by Fra Angelico, is simple, beautiful, and mysterious. Nothing happens except that Mary and Gabriel regard one another with expressions of pained wonderment. Both have their arms crossed in holy awe—or is it shock? Even the angel appears as if he’d had no idea what he would say until he opened his mouth. In an earlier, even simpler version of this painting, between the two figures there is absolutely nothing but a blank, bright wall. How filled with shattering potentiality is that space! 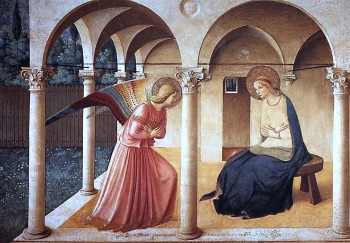 I like how Luci Shaw captures this event in her poem “Virgin”:

As if until that moment
nothing real
had happened since Creation …

(from “Virgin” by Luci Shaw, in Accompanied by Angels: Poems of the Incarnation, William B. Eerdmans Publishing Company, Grand Rapids, Michigan, 2006, p 15.)