Taking the five loaves and the two fish and looking up to heaven, He gave thanks and broke the loaves. -Mt 14:19

If Jesus were stuck out in the wilderness with a multitude today, a little boy might bring Him, not five loaves and two fish, but maybe a bag of jalapino chips and a couple of Mars bars.

Surveying this offering, I imagine Jesus looking up to heaven and saying, “On second thought, better bring Me some stones.” Finally the right opportunity to turn stones into bread! 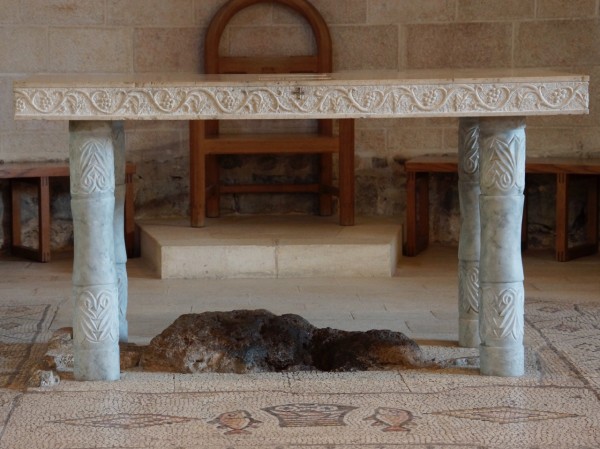 The Tabgha Altar, built over the original stone table used by Jesus

Although Jesus did not turn stones into bread, He probably did use a rock as a table. In a “desolate place” wouldn’t it be natural to set food on a rock to bless and serve it? As it happens, we have an ancient eyewitness account from a woman who saw the very rock on which Jesus had blessed the loaves and fish.

In AD 383 a Spanish pilgrim named Egeria visited the Holy Land and sent back letters to friends at home. These letters are thought to be the first formal writing by a Western European woman. She described an area now known as Tabgha (an Arab contraction of the Greek Heptapegon or Seven Springs) just south of Capernaum on the northwestern shore of the Sea of Galilee. Here she found the hillside believed to be the site of the Sermon on the Mount, and some “stone steps on the shoreline” where Jesus had once stood. Her account continues: “Not far away from Capernaum … is a grassy field by the sea with plenty of hay and many palm trees. By them are seven springs, each flowing strongly. And this is the field where the Lord fed the people with the five loaves and the two fish.” She further reported that “the stone on which the Lord put the bread” had been turned into an altar.

Pilgrims today can still see this rough limestone table preserved as part of the altar in the Church of the Loaves and Fishes at Tabgha, the traditional site of this miracle. (But see the previous chapter on Bethsaida for an alternate location that seems truer to scripture.) The beautiful mosaic floor before the altar, depicting two fish and a basket of bread, is from the fifth century, but underneath it are the remains of a fourth century chapel, surely the one visited by Egeria. In her day the stone was in the same place, apparently having been venerated by Christians from earliest times.

Jesus’ feeding of the multitude is the only miracle present in all four gospels. John regarded it as so important that he recorded it instead of the eucharist, followed by a long discourse on Jesus as the bread of life (Ch 6). Note too that Christ did not produce food out of nothing, but used what was available: a little boy’s lunch. Yes, God created the universe ex nihilo and He could do so again. But instead we see Him honoring the materiality of the present world and transforming it.

We are weak creatures and our spiritual efforts are exceedingly meager: five rituals here, two good deeds there, a handful of prayers. But our Lord will take whatever we offer Him and multiply it into something far more than adequate. As Jesus points out in a postscript to this miracle, “Why are you talking about having no bread? Do you still not see or understand?” (Mk 8:17)