In the First Sanctuary, or Holy Place, of the Old Testament Temple there were three pieces of furniture: the Altar of Incense, the Menorah, and the Table of Showbread.

Now here’s a question: Who was this bread for? Was it for God, or for someone else? 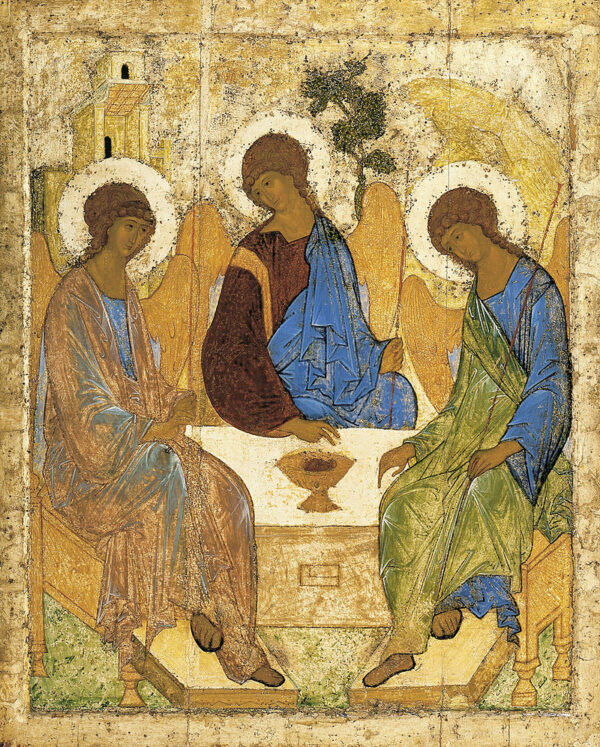 The Holy Trinity by Andrei Rublev

If your answer is God, you are wrong. God has no need for bread, any more than for the endless lambs and calves and doves that were sacrificed in the Temple. God is a self-sustaining spirit; He does not need food.

Who, then, was this bread for? Granted, when the priests removed it on the sabbath day, they were allowed to consume it. But by then the bread was stale, so it was not really for the priests.

Who was the good, fresh bread intended for?

That nice fresh bread placed on the table before God is for us.

Jesus reinforced this when the Pharisees accused His disciples of unlawfully eating grain on the sabbath. Referring to the incident of David, on the run from Saul, eating the showbread from the tabernacle, He says, “Haven’t you read what David did when he was hungry? He entered the house of God, and he and his companions ate the consecrated bread” (Mt 12:4).

If the Temple showbread was freely available to all the people, why didn’t people just help themselves to the showbread any time they liked? Why was it considered off limits?

They had shown their unreadyness clearly in their encounter with God at Mount Sinai. As recorded in Exodus 20:18-19,  “When the people saw the thunder and lightning and heard the trumpet and saw the mountain in smoke, they trembled with fear. They stayed at a distance and said to Moses, ‘Speak to us yourself and we will listen. But do not have God speak to us or we will die.’”

But are we ready? Will we come to the banquet? Will we waltz right into the temple and take that bread off the sacred table and stuff our mouths and souls?

Everyone knows the icon of the Holy Trinity by Andrei Rublev, which shows the Father, Son, and Holy Spirit seated around a table. But have you noticed there is a fourth, empty place at that table? This is the place for the viewer. Will you step forward into the picture and make yourself at home? Will you take your rightful seat at the divine table and rub shoulders with the Trinity?

George Herbert did. In his famous poem “Love III,” after much reluctance over feelings of guilt, shame, unworthiness, false humility, and compulsion to earn his way, finally the poet accepts the Lord’s invitation:

Posted in Blog and tagged Bread of the Presence, Communion, Eucharist.