Different than me, anyhow.  To clarify the degree of difference, I once asked him what would be his favourite way to spend an hour.  “To sit and contemplate a tree.”  I don’t remember what my response would have been to that question at that time, but if it involved trees, it would have been something more along the lines of climbing them or building a tree fort.  Certainly nothing involving contemplation. 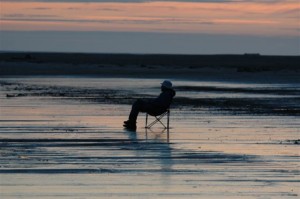 But that’s the way Mike is built.  He’s a contemplative.  Indeed, had God not messed up his plans by sending him a wife, a daughter, and more friends than he would have found in even the most teeming monastery, Mike would be a monk today – a “contemplative” in the “Oh, and what do you do for a living” sense of the word.

While it’s true Mike’s prayers would have accomplished just as much inside the walls of a monastery as they have outside – he loves to pray, there’s nothing he’d rather do – the world would not have been blessed by his remarkable books about marriage, friendship and parenting.  And God, being a good God and wanting the best for His world, did what He had to do to make sure those books got written.  He sent Karen, and many less-than-monkish friends, and ultimately, Heather.

The Mystery Of Marriage (Multnomah Press, 1985) was an astonishing first book, a poetic, high-flying celebration of the one sacrament Brother Michael had thought he would never experience first-hand.  Christian bookstores packed with “how-to” volumes on the subject couldn’t keep this strange, not-particularly-practical item on their shelves: it became the favourite book of many newly married couples, a keenly-felt, deeply-thought book on that most intimate of relationships by a matrimonial novice who wasn’t much used to intimacy.  J.I. Packer commented that, presented with a book on marriage by a newlywed, he expected shallow naivete, platitudes and idealism unseasoned by the practical realities of long years lived together, but was astonished to find himself reading a book filled with “wisdom, depth, dignity, and glow – an outstanding achievement.”

Intimate relationship didn’t come naturally to this introspective, solitary man.  But the fact that such territory was foreign to Mike meant that he has had to work to get good at it: like a traveler in a strange foreign land, he has had to pay attention.  And, like the best of travel writers, Mike sees things the locals never notice, appreciates all the particularities and peculiarities of these strange countries that the natives take for granted.

Practicing The Presence of People: How We Learn To Love (WaterBrook Press, 1999), Mike’s book on friendship, is my favourite.  His startlingly original premise is this: “Why not take all that I’ve learned about knowing God through contemplative prayer and apply it to knowing people?”  And do you know what?  It works.  Brilliantly.  The disciplines of developing intimacy with God, modeled by such devotional writers and mystics as Brother Lawrence, yield extraordinary results when applied to human beings who are, after all, made in God’s image and likeness.  This strange, sideways-thinking, sometimes mystical, always practical book ought to be read – and, more important, lived – by the hundreds of thousands of people who have worn out their copies of the marriage book with many readings and re-readings.  Frankly, The Mystery Of Marriage didn’t work for me when first I read it, newly married: it took almost 20 years of marriage before it began to resonate with me, and now it is pretty much the only book on the subject I find myself returning to again and again.  I suspect Mike’s friendship book will have the same sort of longevity.

Whether it was so intended or not, Mike’s latest book essentially completes a trilogy on human relationships.  In  The Mystery Of Children: What Our Kids Teach Us About Childlike Faith (WaterBrook Press, 2001), the author looks deeply into his year-by-year relationship with his daughter as she grows from infancy to the verge of adulthood.  As transparently personal as his previous relationship writing, this book about growing young by raising a child had me praising God that He has called this contemplative mystic to forsake “the religious life” and, instead, to live a life more ordinary, a life more like mine, but to live it religiously.  His experiences with his daughter are the same as those of any parent: the difference lies in his response.  He mulls, he meditates, he prays: he dives very, very deep into the waters of parenthood, and comes up with rare pearls we surface-swimmers and water-treaders might never discover on our own.

If you need to learn about something, go to somebody who had to learn it the hard way.  One day, mulling over the Beatitudes, Mike came to a realization about Jesus’ strange, powerful words: that essentially they all had to do with the heart of what it means to become like a little child – and that childlikeness could be discovered by moving out of one’s strength into the area of one’s greatest weakness.

Intimacy with God comes easy to Mike Mason: the hard part is intimacy with people.  But the Teacher has assigned Mike to major in that subject, and so he’s spent the greater part of his life working hard in a discipline that makes him feel small, unskilled, continually challenged and out of his depth – just like a child.

But in this particular school, Mike is what teachers call “motivated,” a hard-working student who, unlike his more naturally inclined fellow students, does all his homework, works through the Questions For Further Study at the end of each chapter, and even carries out a Schedule of Regular Review.  So if you need somebody to tutor you for that upcoming exam – whether it’s in Marriage, Friendship or Parenting – I recommend that you call up Mike.

Or, better yet, borrow his notes.

Posted in Reviews and Interviews.