Jesus entered Jericho and was passing through. -Lk 19:1

Take a hike down the Bright Angel Trail of the south rim of the Grand Canyon and you’ll see, plainly spread out like the layers of a gigantic Dagwood sandwich, epoch after epoch of earth’s geologic history recorded in rock strata. By the time you reach the floor of the canyon, you’re deep into the Pre-Cambrian period over 600 million years ago. 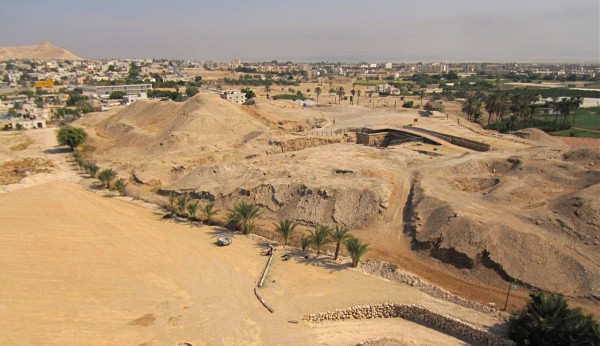 What the Grand Canyon is to geology, Jericho is to urban settlement, for it’s the oldest continuously inhabited city in the world. Situated a mile northwest of the modern city center is Tell es-Sultan, a one-acre, 70-foot high mound (tell means mound in both Hebrew and Arabic) formed of layers of debris from twenty-three ancient civilizations going back to the Stone Age. Discoveries here include the earliest known urban fortifications: stone walls and a tower, repeatedly rebuilt, revealing a prolonged history of conflict. There is evidence that the city was completely destroyed at a time corresponding to the Israelite invasion when “Joshua fit the battle of Jericho and the walls came a-tumblin’ down.”

One of Jesus’ best-known parables begins, “A man was going down from Jerusalem to Jericho…” (Lk 10:) “Down from” and “up to” are appropriate phrases to describe the sixteen miles of road between Jerusalem and Jericho. For Jericho is not only the world’s oldest city but the lowest, at 850 feet below sea level, while Jerusalem sits 2500 feet above. Psalms 120-134 are known as the “Songs of Ascent” because pilgrims sang them on their way up to the great festivals in Jerusalem. Jesus would have walked this road many times, as Jericho lay on the normal route from Galilee (though occasionally He went through Samaria instead). The parable of the Good Samaritan describes a man who fell afoul of robbers on this road, which even today traverses a dangerous wilderness populated only by scattered pockets of Bedouins.

In Jericho Jesus healed a blind man and, just as astoundingly, won the heart of the chief tax collector Zacchaeus. Today one can still see the tree that the little man climbed in order to view the famous rabbi as He passed by. No doubt this is not the same tree, but it may well be planted in the same place, for the fact that Luke specifically identifies it as a “sycamore-fig” (19:4) strongly suggests a local tradition enshrining this very tree. It was, after all, a cause célèbre, having inspired a spontaneous, radical change in one of the city’s wealthiest and most notorious citizens.

Seeing such miracles performed in Jericho, the first city that the Israelites had conquered in the Promised Land, it was no wonder “the people thought that the kingdom of God was going to appear at once” (Lk 19:11). Jericho had a special significance even for Jesus, who had appeared here to Joshua some 1300 years before, announcing Himself as “the commander of the Lord’s army” (Jos 5:13-15). As the scene of this dramatic theophany, where the walls had marvelously fallen down, Jericho was of great spiritual and strategic significance, strongly evoking the prophecy of the Messiah who would lead His people to victory and establish the kingdom of God.

A final note: Jericho had grown up around a perennial spring, but in Elisha’s day the water was bad. The prophet threw a bowl of salt into the spring, prophesying that “never again will it cause death.” Miraculously sweetened, the water “has remained wholesome to this day” (2 Ki 2:21-2). Now crowned with a beautiful fountain, that spring remains a potent sign of the true kingdom of God that transforms, not by military force, but by the salty sweetness of the gospel.