“The latter glory of this house shall be greater than the former,” says the Lord of hosts. “And in this place I will give peace.” –Haggai 2:9

The Temple Institute in Israel is an organization devoted to establishing the Third Temple, a new Jewish temple to be built on the site of the Second Temple, precisely where the Muslim Dome of the Rock now stands.

Already many of the ritual items needed for renewed temple worship have been reconstructed, including the stone altar for sacrifices, the table of showbread, the menorah of pure gold (seventy-five pounds’ worth), and the High Priest’s crown, ephod, and breastplate. Building plans in hand, the Temple Institute is ready to roll the moment Yahweh opens the way. 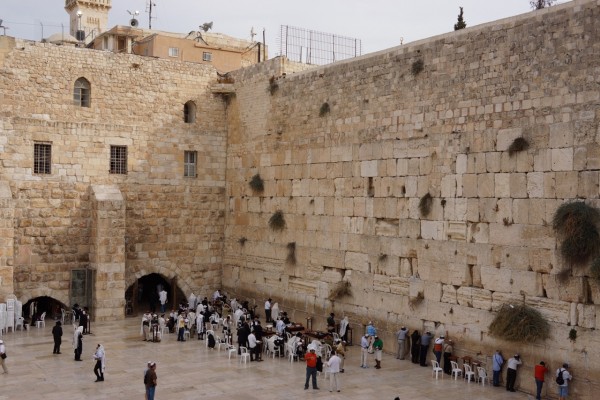 Meanwhile, all that remains of the Second Temple are some sections of the retaining wall, the platform on which the buildings formerly stood. Even these remnants inspire admiration. The most famous portion is the Western or Wailing Wall, a section 187 feet long, of which the bottom seven courses of stones (plus a further seventeen courses below ground) survive from the original Temple. This, the most sacred of Jewish sites, is where Jews for centuries have come to lament the loss of their Temple and to worship. As a plaque at the site states, an ancient tradition holds that “the Divine Presence never moves from the Western Wall…. For one thousand nine hundred years the Wall was deserted but the sight of its stones was engraved on every Jewish heart.”

Just as today’s Wall is like a toe severed from the rest of its body, so the Temple in Jesus’ day lacked its most vital organ, the Ark of the Covenant. The Ark had disappeared when the Babylonians destroyed the First Temple, leaving the Holy of Holies empty. All that was there was the Evan Shetiyah, the Foundation Stone on which the Ark had rested. When the Roman general Pompey conquered Jerusalem in 63 BC and performed the sacrilege of entering the Temple, in the sanctuary he found the golden menorah and the table of showbread. But when he entered the Holy of Holies, to which only the High Priest was allowed access, he found … a vacant room. Astonished, he came out crying, “It’s empty and deserted!”

What happened to the Ark of the Covenant? Does even Indiana Jones know where it is? The Temple Institute will have a hard time recreating the Ark, for it contained the stone tablets of the law written by the finger of God Himself (or possibly by Moses; the text regarding the second set of tablets is ambiguous on this point; compare Exodus 34:1 with 34:27-8).

After the Romans destroyed Jerusalem in 70 AD, the Jews were expelled from the city, and to this day they are forbidden to pray on the Temple Mount—the issue at the heart of the most recent hostilities. The Western Wall is as close—almost—as modern Jews can come to their former house of worship. However, there exists a place even closer. At the north end of the Wall (left of center in the photograph) is a structure called Wilson’s Arch, which in the first century supported a road leading onto the Temple Mount. From Wilson’s Arch one may enter a tunnel that runs all along the northern portion of the Wall. Proceeding about 150 feet along this tunnel, one comes to an ancient entrance known as Warren’s Gate, now blocked with stones and fill. Pause here and face east, toward the Wall, and look up.

About fifty feet above and ahead of you is the former location of the Holy of Holies. The site of a medieval synagogue called The Cave, this is now the nearest possible approach to the most holy place. Moreover, the Ark of the Covenant is reputed to be hidden nearby. In the twelfth-century Book of Temple Service, Maimonides wrote, “When Solomon built the Temple, knowing it was destined to be destroyed, he built underneath, in deep and winding tunnels, a place in which to hide the Ark. It was King Josiah who commanded the Ark to be hidden in the place prepared by Solomon.”

Fiction? Perhaps. What we do know is that when Jesus of Nazareth visited this Temple, the Holy of Holies was empty, and the prophecy of Malachi 3:1 was fulfilled: “Suddenly the Lord you are seeking will come to His temple.”

Next Week:  The Dome of the Rock