It was winter, and Jesus was in the temple area walking in Solomon’s Colonnade. –John 10:23

Every once in a while in the gospels we get a glimpse into the life of Jesus as an ordinary man: asking for a drink of water, asleep in the bottom of a boat, cooking fish over a charcoal fire by the lake.

Or consider Mark 11:11: “Jesus entered Jerusalem and went to the temple. He looked around at everything.” Like any tourist!

The verse at the head of this chapter again catches Jesus at an unguarded moment, a normal activity in a normal day. It’s a winter morning and He’s just strolling in the Temple grounds. It’s the Feast of Dedication, John tells us, or Hanukkah, the Festival of Lights. “The true light that gives light to every man” (Jn 1:9) was present in human form, yet indistinguishable from the pale winter sunshine falling across the broad courtyard. But He was about to reveal Himself.

A group of Jews, accosting Him, demanded that He tell them plainly if He was the Christ. He did so, and going even further He said, “I and the Father are one.” From there things got ugly, the Jews tried to stone Him, and Jesus had to beat a hasty retreat out of town. No longer your ordinary day.

I imagine it as cool and breezy, suitable weather for a brisk altercation. The scene takes place under cover of Solomon’s Colonnade, a long pillared walkway running the entire length of the Temple’s eastern wall (about 1500 feet), open on one side like a cloister, and on the other overlooking the Kidron Valley. A portion of the original Temple that had survived the Babylonian destruction, it was still intact in Jesus’ day. Why had it been spared? Perhaps on account of its pure majesty, which, as Josephus comments, “to such as had not seen it, was incredible; and even to such as had seen it was greatly amazing.” 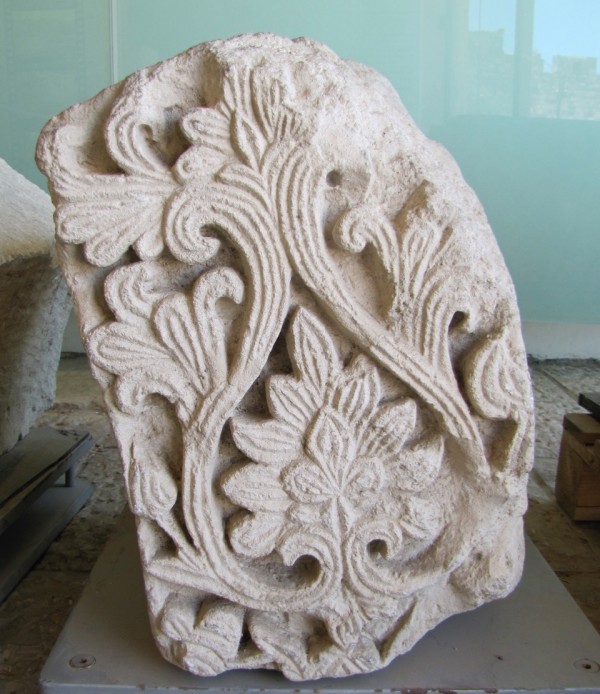 Fragment of a Temple decoration

Part of that majesty, no doubt, derived from its vast expanse, and another part from the beauty of proportionality produced by rows of columns. Yet another part may be glimpsed in the accompanying photograph, which shows but a fragment of the decorations that adorned the tops of the pillars and the ceiling of all the Temple porticos: an intricate network of acanthus leaves and flowers that would have rendered the colonnade more like an arbor than a cloister. No wonder Jesus enjoyed walking here. It was a place to meditate, to pray, or to gather in small groups for teaching and debating, as Jesus had done with the elders as a young boy, and as He did later with His disciples and opponents. The early Christians would hold their first public meetings in Solomon’s Colonnade (Acts 3:11; 5:12).

Along the south end of the Temple stood another columned area, the so-called Royal Stoa (or Royal Portico), so named for its greater size. In this three-storey structure, two rows of columns formed three long aisles with a central nave, as in a Roman basilica, while a fourth row of columns opened onto the Temple courtyard. The Stoa had a total of 162 columns, each one twenty-seven feet tall, topped by a Corinthian capital, and so big around that three men with outstretched arms could barely encircle one. This grand building was the setting for yet another clash between Jesus and the establishment, for this is where the moneychangers set up their tables, and the dealers in what today might be called “holy hardware.”

Today all that is left, physically, of these magnificent porticoes and the tumultuous scenes they witnessed are a few fragments of decorated stone: friezes, cornices, capitals, parts of columns. So homely, in a way, yet so redolent of the life of the Son of God when He lived on earth. Such fragments say to us: These things you read about in the Bible—they really happened.