Pilate brought Jesus out and sat down on the judge’s seat at a place known as the Stone Pavement (which in Aramaic is Gabbatha). –John 19:13

At this point in our story, the trail of stones that Jesus actually saw and touched begins to grow cold, buried beneath twenty centuries of urban development.

For the modern-day Via Dolorosa is not precisely the same as the route Christ would have followed in the first century. Nevertheless, even today there exist some stones of great interest that do give the pilgrim an impression of the authentic milieu. 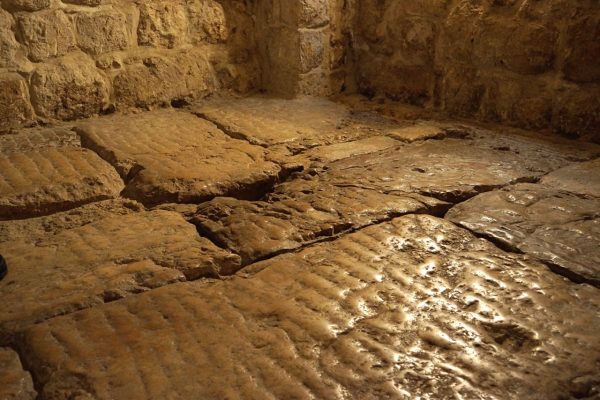 One example is the Lithostrotos, located below a convent beside the Ecce Homo Arch. The word means, in Greek, a stone pavement, referring to the area before Pilate’s judgment seat in the Praetorium. Tradition long held that these stones in the photograph were the very place where Jesus was tried. However, the present Lithostrotos actually dates from a century after Jesus’ time, when it served as the plaza for a Roman market. Even so, it is surely reminiscent of the original Gabbatha. It even includes a flagstone (not pictured) inscribed by Roman soldiers with a circular pattern of etchings on which they would have played the ‘Game of Kings.’ This was a dice game in which the playing piece was a prisoner, mocked as a trumped-up king—exactly as happened with Jesus (Mk 15:16-20). Note also the striations in the rock, the Roman means of preventing slippage of animal hooves and chariot wheels.

The Lithostrotos also marks the second Station of the Cross: “Jesus takes up the cross.” (The first Station is “Jesus is condemned to death.”) The Via Dolorosa progresses through fourteen Stations, some scriptural and others traditional, a devotional practice that originated in pilgrimages to Jerusalem. As early as the fifth century, a monastery in Bologna built a series of connected chapels to represent significant shrines in Jerusalem. In Jerusalem itself the custom began much later, in the mid-fourteenth century, when a group of Franciscan friars carried heavy crosses along a route which became known later as the Via Dolorosa. To this day, every Friday the Franciscans still wind their way through the narrow lanes of the Old City, conducting pilgrims through the fourteen stations commemorating Christ’s passion.

The stifling heat, the cobbled streets lined with shops, the noisy crowds, the vendors navigating impossibly through the tumult with clumsy carts piled high with merchandise—all this has doubtless changed very little in two thousand years. And while the beginning point of the Via Dolorosa is debatable, the general route and some of the stations along it are probably accurate, especially the end point, the Church of the Holy Sepulcher, which indeed has a strong claim to authenticity as the place of Jesus’ crucifixion, burial, and resurrection.

The day I followed the Stations of the Cross, one woman in our group complained that she couldn’t hear what was being said, and that it was so hot and there were so many people pressing around that she “didn’t find this a very devotional experience.”

“Never mind,” replied her neighbor. “It was worse for Jesus.”

To follow the stations means more than simply to honor the suffering and death of Jesus. It is to conform ourselves to Him, “becoming like Him in His death” (Php 3:10), offering our own present suffering and our imminent death as a participation in Christ. As Elizabeth of the Trinity wrote during her painful death from Addison’s disease, “If you knew what a work of destruction I feel throughout my whole being! The road to Calvary has opened, and I am wholly joyful to walk it like a bride beside the divine Crucified.”