The Golden Gate is the entrance to Jerusalem that Jesus would have used for His triumphal ride on Palm Sunday. For over 500 years it has been closed; not a single soul has passed into or out of it. 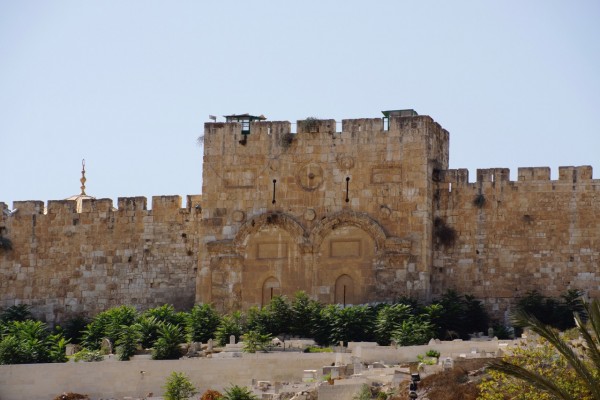 The present structure is not the one from the first century; it was probably built by Justinian in the 520’s AD, or possibly by the Muslims some 300 years later. But the remains of the older gate from the Second Temple period still lie some twenty feet beneath it. And the stones in the wall on either side are from Solomon’s original retaining wall, while the ones at the very bottom were placed by Nehemiah in BC 445.

The Golden Gate is the oldest of the eight gates in the present city. Midway in the eastern wall, it faces the sunrise and leads directly onto the Temple Mount. The Jewish Temple was not some Stonehenge, oriented according to complex astronomical calculations. The orientation was simple: eastward, toward sunrise, where one day “the sun of righteousness will rise with healing in its wings” (Mal 4:2). The word orient meant originally to align something towards the east, and to this day the altars of many Christian churches are built facing east.

There is something eerily compelling about a gate that remains permanently closed, walled up, impassable. Gates are meant to be used, not just looked at—especially in busy modern times in a city teeming with traffic and commerce. Why don’t they open up the Golden Gate?

But no, Ezekiel prophesied that it would be shut, and shut it is. The Ottoman Sultan Suleiman the Magnificent sealed this gate in 1541, ostensibly to render the city more defensible against Crusader attacks. But in blocking this gate and planting a cemetery in front of it, Suleiman also aimed to prevent an even greater threat: the entrance of the Messiah. Islamic tradition holds that this is the threshold of heaven and hell, where the resurrection and the final judgment will take place. In the Old Testament the Shekhinah Glory, the Divine Presence, approached His Temple through this gate, as in Ezekiel 43:1-4: “Then the man brought me to the gate facing east, and I saw the glory of the God of Israel coming from the east. His voice was like the roar of rushing waters, and the land was radiant with his glory… and I fell facedown. The glory of the Lord entered the temple through the gate facing east.” No astral predictions rule the King of Glory; He comes at His own whim.

In Jewish tradition the Shekhinah will not appear again until the Messiah comes, when a new gate will replace the present one. Until then, the strains of Psalm 24 remain a plaintive longing:

Lift up your heads, O you gates;
be lifted up, you ancient doors,
that the King of glory may come in.

We can imagine what joy Jesus must have felt while winding down from the Mount of Olives toward His beloved city, to the ecstatic praises of a crowd whose eyes, at least for this moment, were opened to the glory of their Messiah. But no, Jesus was not joyful; instead He felt like a jilted lover. Let’s not miss the sexual imagery of a man mounted on a beast entering a portal through a wall. As the beloved sings in the Song of Songs, “I am a wall, and my breasts are like towers” (8:10). For the Christ of God to cross this threshold was a romantic act of passionate embrace. Yet tragically, the Divine Suitor’s love would be unrequited, indeed violently rejected. Within sight of the Golden Gate, Jesus halted the entire procession and wept, saying through tears, “If you, even you, had only known on this day what would bring you peace—but now it is hidden from your eyes…. because you did not recognize the time of God’s coming to you” (Lk 19:42, 44).

Next Week:  The Rock of Calvary

(Note: So far this book has followed the story of Jesus chronologically. For the next three weeks, however, chapters will be published out of sequence in observance of Palm Sunday, Good Friday, and Easter. On April 6 the proper sequence will resume with Chapter 43.)