Those who accepted Peter’s message were baptized, and about three thousand were added to their number that day. –Acts 2:41

“That day” was the Feast of Pentecost, fifty days after Jesus’ ascension into heaven. Peter, newly filled with the Holy Spirit, had just delivered a sizzler of a sermon to a Jerusalem crowd who were “cut to the heart.”

When they asked, “What shall we do?” Peter replied, “Repent and be baptized” (vv 37-8), whereupon they all trooped over to the local swimming hole, which wasn’t just one pool but dozens of mikva’ot, the ritual baths used for washing prior to Temple worship. These pools were located just beyond the large public square at the foot of the broad staircase on the southern side of the Temple Mount. This whole area would have been jam-packed that day, both because of the Jewish feast and because of the Holy Spirit’s massive publicity campaign for Jesus. 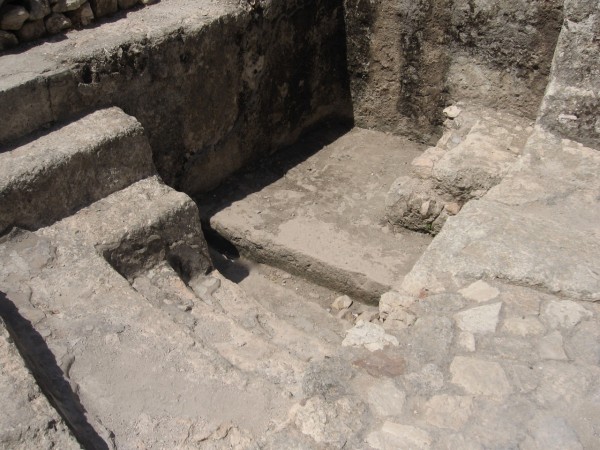 A Mikveh on the Temple Mount

The mikveh (singular) pictured in the photograph was almost certainly one of the pools used to baptize the 3000 new converts.  Moreover, either it or a similar one nearby was undoubtedly used by Jesus Himself, who like any worshiper would have been obedient to the law of ritual cleansing before going up to the Temple into the presence of God.

Today our bathtubs are made of acrylic or fiberglass. But in Jesus’ time they were made of stone, usually cut right into a rock outcrop and then plastered. The word mikveh means collection, referring to a collection of water for washing, but this washing was more often for ritual purity than for cleanliness. The water in a ritual bath had to be “living water”—that is, running, as from a spring, or at least fresh, as from rain, but not stored or carried in a vessel (though stored water could be mixed with fresh in a pool called an otzar). And the bath had to be deep enough for total immersion. The bather didn’t stretch out and relax as we do, but simply went down a few steps into the water, then out again. In many mikva’ot the stairs had a partition to separate the unclean side from the clean side.

Such stone baths were common because Jews had to purify themselves often: before the sabbath and other occasions, and after certain events that made them unclean, including contact with a dead body or a grave, or even slight physical contact with a non-Jew in the marketplace. When the Pharisees criticized Jesus’ disciples for not washing before eating, Jesus retorted that uncleanness comes not from the outside but from the inside (Mk 7:18). Hence, while Jews had to wash ceremonially again and again, Christians do so only once, in baptism, which is “not the removal of dirt from the body but the pledge of a good conscience toward God” (1 Pet 3:21). As the dead are commonly immersed in earth, immersion in water symbolizes death to self and new life in Christ, who said of His own impending death, “I have a baptism to undergo, and how distressed I am until it is completed!” (Lk 12:50)

To this day conversion to Judiasm requires immersion in a mikveh, a rite called tevilah, wheras Christian baptism is not always by immersion but can take other forms. A Presbyterian (who baptizes by sprinkling), while chatting with a Baptist (who practices immersion), asked, “So tell me, if a fellow went into the water up to his waist, would that count?”

“No,” replied the Baptist, “that’s not enough.”

“You see?” concluded the Presbyterian. “It’s the little bit of water on the top of the head that counts.”