A man crippled from birth was carried to the temple gate called Beautiful. –Acts 3:2

Here is a place where we can say with certainty that Jesus walked—and not only Jesus but Peter and John and Paul. For this, along with the neighboring gate discussed in Chapter 5, was the main entrance onto the Temple Mount. 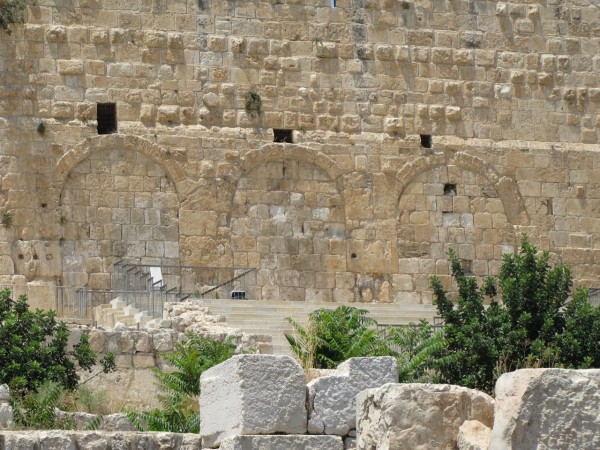 The name Beautiful may have applied to the triple portal in the southern wall of the complex, as shown in the photograph, or to an inner gate into the Temple building itself, or perhaps even to both. Given the number of steps a crippled man would have to be carried in order to beg beside the Temple, it’s more likely he took up his daily position at the bottom of these outer stairs where there was more traffic. How much more impressive, then, when he leapt to his feet and danced up this staircase “into the temple courts, walking and jumping and praising God” (Acts 3:8)!

This Triple Gate (as it’s now usually called) was blocked shut by the Crusaders around 1100 to fortify against the Muslims. Only one stone in the present structure survives from the time of Jesus: part of a doorjamb (second photo) at the bottom of the far left portal. (But as previously discussed, many stones in the staircase also date from the first century). The detailed carving on this stone provides a hint as to why this gate may have been called Beautiful, but more likely the name derived from the much more splendid ornamentation immediately inside. While Robinson’s Arch carried worshipers directly to the Temple Mount, the two southern gates opened into lavishly decorated tunnels and thence to staircases that rose forty-six feet up to the surface. 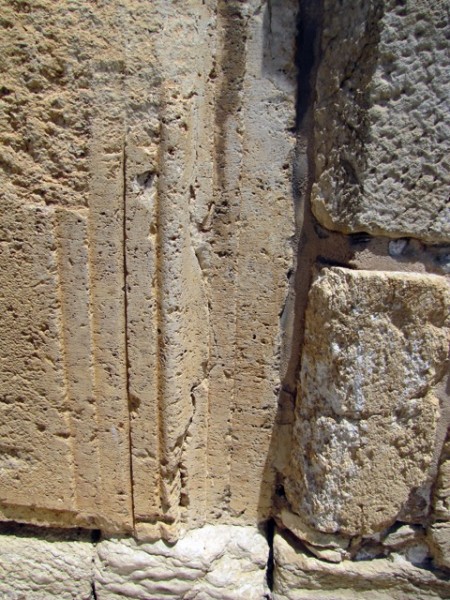 Detail of original doorjamb of the Beautiful Gate

Some of this rich interior decoration has survived inside the neighboring gate (as noted in Chapter 5). This so-called Double Gate is largely obscured by a projecting wall built by the Crusaders, but the tunnel behind the gate is wonderfully well preserved. It features two huge domes covered with elaborate designs—all geometric and floral patterns, in deference to a strict interpretation of the Second Commandment prohibition against human or animal imagery. Here, more than in any other Temple remains, one gets an idea of the sumptuous engravings that once adorned so much of this glorious building. These were beautiful gates indeed. Sadly, today it is almost impossible to obtain permission from the Moslem authorities to view this tunnel, as the only access is from the front of the al-Aqsa Mosque directly above it.

Jesus said two things about gates: “Small is the gate and narrow the road that leads to life” (Mt 7:14), and “I am the gate; whoever enters through Me will be saved. He will come in and go out, and find pasture” (Jn 10:9). Gates, of course, are for both coming in and going out. It is clear why someone might want to enter the gate that leads to life, but why would anyone want to go back out? The answer is in the book of Revelation, where the New Jerusalem descends from heaven to earth so that “the dwelling of God is with men, and He will live with them” (21:3). The Holy City has walls with twelve gates, but “on no day will its gates ever be shut” (v 25). That is, a distinction between heaven and earth will remain, but without any barrier to prevent free access. The gates will open one way into heaven and the other way into the New Earth—a far cry from the present Beautiful Gate which is permanently walled up. In the New Creation, no longer is there an outside and an inside but everyone is on the same side.