As He was leaving the temple, one of His disciples said to Him, “Look, Teacher! What massive stones! What magnificent buildings!” –Mk 13:1

This poor disciple takes the prize for the New Testament’s Most Ill-Timed Remark.

Jesus has just delivered the angriest sermon of His ministry, a scathing tirade of “Seven Woes” against the Pharisees (Mt 23). Still fuming, He’s leaving the Temple when the disciple in question, who must have been lollygagging off on his own, catches up with the Master and delivers his architectural salute, whereupon Jesus growls, “I tell you the truth, not one stone here will be left on another; every one will be thrown down.”

The disciples were used to village buildings made from stones that could be hand-carried one at a time to the construction site, where they were roughly fitted together, packed tight with smaller stones and mud, then smoothed with mud plaster and whitewashed. Larger, flat stones for doorsteps or lintels might have to be carried by two men, but that was as big as things got.

The Jerusalem Temple was another thing altogether. The limestone blocks of the Temple Mount, called ashlars, weighed an average of two tons, and some were much larger. In the photograph, which shows the southwest corner of the retaining wall, the largest stone is some forty feet long, eight wide, three tall, and has been calculated to weigh eighty tons. 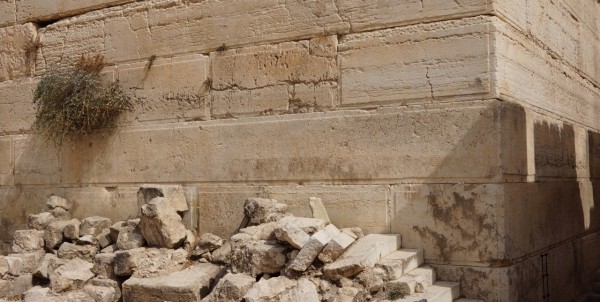 But even it’s only a baby. The really big bruisers are below ground, closer to where the Temple would have stood. There, in the tunnel north of the Western Wall, four gigantic ashlars have been uncovered that form part of the Master Course, the foundational row that aligned and stabilized all the rest. The largest of these behemoths is 44 feet long, 15 feet wide, 12 high, and weighs over 600 tons. (For comparison, the largest Stonehenge monoliths are 50 tons, and the largest Easter Island moai are 60 tons.)

No one knows how such immense stones were moved from the quarry. Large blocks were split by driving wooden wedges into grooves and soaking them with water. Then, perhaps, great wooden wheels were built around the stones, or else teams of oxen pulled them to the construction site on rollers. There the rough blocks were smoothed and narrow margins were cut around the edges, leaving slightly raised bosses in the center. In one day two hundred workers could produce about eight cubic meters of cut and dressed stone. The ashlars were stacked without mortar or adhesive, each row recessed slightly for stability, and each joint so perfectly matched that not even a knife blade could slip in between. The margins around each stone, about two inches wide and half an inch deep, gave a sense of relief to the wall surface so that it didn’t appear blank and monolithic. At higher levels, other features such as pilasters added visual interest and shadow.

King Herod emplyed over 10,000 workers to build the Temple complex. But when it came to the sanctuary, the House of Yahweh, he had a problem, since only Jewish priests were allowed access to this area. Therefore he had 1000 priests specially trained in stonemasonry.  Because of the importance of continuing the services and sacrifices, materials for this central portion were prepared in advance and it was completed in eighteen months, whereas the rest of the construction took at least “forty-six years” (Jn 2:20).

My name being Mason, I’m interested in all these details of stonecraft. Though I’ve never looked into it, I probably have stoneworkers in my family history. Possibly my very genes hold an awareness of the need to build solidly and levelly without breaks or chinks, an attribute that may have contributed to my calling as a writer. And naturally one of my favorite scriptures is Psalm 127:1, which in the Jerusalem Bible reads, “If Yahweh does not build the house, in vain the masons toil.”

Next Week:  The Western Wall