Here’s one of my favorite parables by Hans Christian Andersen, as translated by Jean Hersholt:

In a poet’s study, somebody made a remark as he looked at the inkstand that was standing on the table: “It’s strange what can come out of that inkstand! I wonder what the next thing will be. Yes, it’s strange!”

“That it is!” said the Inkstand. “It’s unbelievable, that’s what I have always said.” 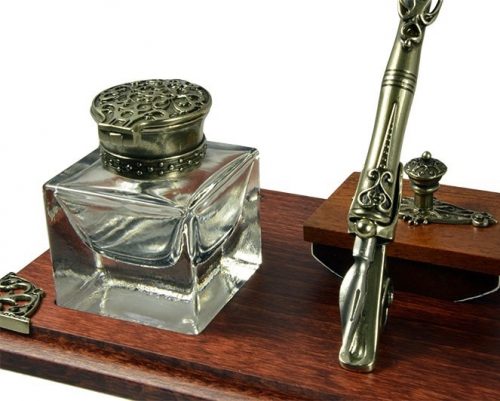 The Inkstand was speaking to the Pen and to everything else on the table that could hear it. “It’s really amazing what comes out of me! Almost incredible! I actually don’t know myself what will come next when that person starts to dip into me. One drop from me is enough for half a piece of paper, and what may not be on it then? I am something quite remarkable. All the works of this poet come from me. These living characters, whom people think they recognize, these deep emotions, that gay humor, the charming descriptions of nature—I don’t understand those myself, because I don’t know anything about nature—all of that is in me. From me have come out, and still come out, that host of lovely maidens and brave knights on snorting steeds. The fact is, I assure you, I don’t know anything about them myself.”

“You are right about that,” said the Pen. “You have very few ideas, and don’t bother about thinking much at all. If you did take the trouble to think, you would understand that nothing comes out of you except a liquid. You just supply me with the means of putting down on paper what I have in me; that’s what I write with. It’s the pen that does the writing. Nobody doubts that, and most people know as much about poetry as an old inkstand!”

“You haven’t had much experience,” retorted the Inkstand. “You’ve hardly been in service a week, and already you’re half worn out. Do you imagine you’re the poet? Why, you’re only a servant; I have had a great many like you before you came, some from the goose family and some of English make. I’m familiar with both quill pens and steel pens. Yes, I’ve had a great many in my service, and I’ll have many more when the man who goes through the motions for me comes to write down what he gets from me. I’d be much interested in knowing what will be the next thing he gets from me.”

Late that evening the Poet came home. He had been at a concert, had heard a splendid violinist, and was quite thrilled with his marvelous performance. From his instrument he had drawn a golden river of melody. Sometimes it had sounded like the gentle murmur of rippling water drops, wonderful pearl-like tones, sometimes like a chorus of twittering birds, sometimes like a tempest tearing through mighty forests of pine. The Poet had fancied he heard his own heart weep, but in tones as sweet as the gentle voice of a woman. It seemed as if the music came not only from the strings of the violin, but from its sounding board, its pegs, its very bridge. It was amazing! The selection had been extremely difficult, but it had seemed as if the bow were wandering over the strings merely in play. The performance was so easy that an ignorant listener might have thought he could do it himself. The violin seemed to sound, and the bow to play, of their own accord, and one forgot the master who directed them, giving them life and soul. Yes, the master was forgotten, but the Poet remembered him. He repeated his name and wrote down his thoughts.

“How foolish it would be for the violin and bow to boast of their achievements! And yet we human beings often do so. Poets, artists, scientists, generals – we are all proud of ourselves, and yet we’re only instruments in the hands of our Lord! To Him alone be the glory! We have nothing to be arrogant about.”

Yes, that is what the Poet wrote down, and he titled his essay, “The Master and the Instruments.”

“That ought to hold you, madam,” said the Pen, when the two were alone again. “Did you hear him read aloud what I had written?”

“Yes, I heard what I gave you to write,” said the Inkstand. “It was meant for you and your conceit. It’s strange that you can’t tell when anyone is making fun of you. I gave you a pretty sharp cut there; surely I must know my own satire!”

They were both satisfied with their answers, and it is a great comfort to feel that one has made a witty reply—one sleeps better afterward. So they both went to sleep.

But the Poet didn’t sleep. His thoughts rushed forth like the violin’s tones, falling like pearls, sweeping on like a storm through the forest. He understood the sentiments of his own heart; he caught a ray of the light from the everlasting Master.

To Him alone be the glory!

Next Post:  The Prey Overcomes the Predator: A Missionary Parable