Now there is in Jerusalem near the Sheep Gate a pool, which in Aramaic is called Bethesda and which is surrounded by five covered colonnades. –John 5:2

Reading this verse, one may wonder why there were five colonnades rather than four. Isn’t a pentagon an odd shape for a pool in the Holy City? 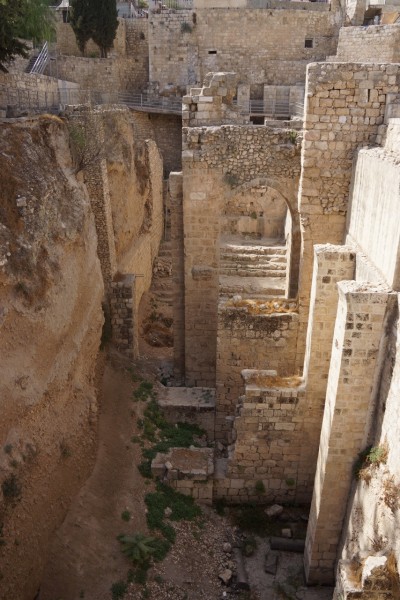 The Pool of Bethesda

But no, it turns out there were two rectangular pools, an upper and a lower, divided by a dam that comprised the fifth colonnade. We know this because the original twin pools, dating from the second century BC, have been excavated on the northern edge of the Temple Mount. The photograph shows just the lower pool (deep below present-day street level) and the dam (far right), along with the remains of the Basilica of the Paralytic, a Byzantine church built over the pools about 350 AD. The pools were fed by a nearby spring whose reddish water lent it a reputation for healing power. According to John 5:4 (omitted in most versions), “From time to time an angel of the Lord would come down and stir up the waters.” Certainly healings must have occurred here, both before the time of Jesus and after. The Romans even built a shrine here to Asclepius, the god of healing.

But Jesus did not depend on reddish or agitated water or water of any kind. To an invalid lying by the pool who had waited thirty-eight years for healing, the Lord simply said, “Get up! Pick up your mat and walk” (v 8), and at once the man sprang up. If Jesus had told him to walk across the pool, he would have done that—not from any faith of his own but from the authority of the Son of God.

In fact the man does not appear to have had any faith at all. When Jesus asks him, “Do you want to get well?” he just complains that there is no one to help him into the pool when the water is stirred. Unlike most others who received healing in the gospels, this fellow has no idea who Jesus is, and when he finds out, all he does is to go and tattle on Him to the Pharisees, who are upset with the radical rabbi for healing on the sabbath. When Jesus warns the man, “Stop sinning or something worse may happen to you” (v 14), we get the feeling that Jesus has read this fellow’s mail and that something worse will indeed befall him.

Why then does Jesus bother healing him? Is this a cautionary tale, or perhaps a deliberate provocation to the Pharisees? A few verses later Jesus makes a point of saying, “The Son can do nothing by Himself; He can do only what He sees His Father doing” (v 19)—almost as though the Son Himself wonders what the Father may be up to in healing this ungrateful wretch.

The story presents a dramatic contrast with the healing of the blind man at the Pool of Siloam. There the cured man, far from ratting on Jesus, passionately defends Him to the accusing authorities, and does so at great personal cost, for they expelled him from the Temple. Of this man Jesus says that no sin was involved in his illness, whereas in the case of the Bethesda invalid a clear parallel is drawn between the man’s sin and “something worse” happening. Most telling of all, when the man who had been blind from birth discovers who Jesus is, and sees with his own eyes the One who created those eyes, he believes in Him as Lord and Christ, “and he worshiped Him” (Jn 9:38).

One wonders what this looked like. Did the man prostrate himself in adoration right there in public? What an astounding thing to do in the Holy City of the one true God: to fall to your knees before a human being! But just as surprising is the reaction of the other man who, having been healed after four decades of crippling illness, did not fall down in worship.

Even so, Jesus had mercy on them both. Indeed the name Bethesda means house of mercy.