On an October day at Jerusalem’s Feast of Tabernacles, a man who had been born blind gazed in wonder at a new world. The first thing he saw, bending down to wash mud from his eyes, was his own reflection in the water of the Pool of Siloam. 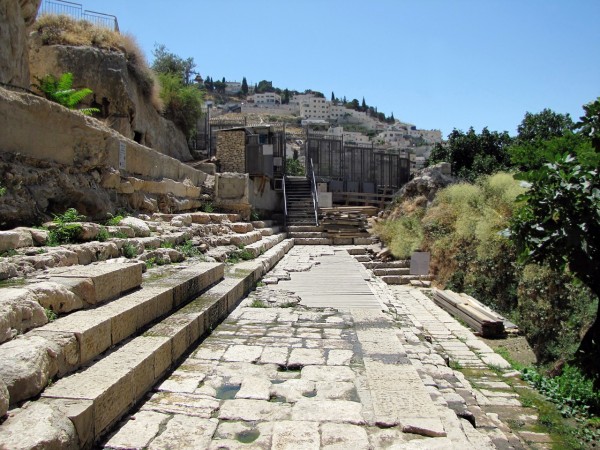 The Pool of Siloam

In 2004, during installation of a new sewer system at the south end of the City of David, workers uncovered the remains of this ancient pool. Originally the size of two football fields, it’s now mostly buried below twenty centuries of debris. In the photograph above we see the terrace and steps (originally the same on all four sides) that led down to the water level.

Artist’s Reconstruction of the Pool of Siloam

King Hezekiah built this pool as a reservoir in about 700 BC. It was fed by the Gihon Spring through a winding channel a third of a mile long, cut through rock in order to conceal the city’s water supply from the invading Assyrians (2 Ki 20:20; 2 Ch 32:4). This tunnel, which visitors today can walk through, was dug by two teams beginning at opposite sides of the hill and meeting in the middle. This remarkable engineering feat is thought to have been accomplished by hammer sounds from below being traced at ground level.

Jesus seems to have met the man born blind, not at the pool, but closer to the Temple about a quarter mile to the north. The original stepped street of paving stones that leads between these two points has been excavated, enabling one to follow today in the blind man’s footsteps. It must have been quite a journey of faith as he felt his way along the Siloam Street with mud in his eyes. John makes a point of saying that the word Siloam means sent. First this fellow was sent to the pool—where next? The followers of Jesus are all sent ones. Thirty-nine times in John’s gospel Jesus refers to Himself, or is spoken of, as one who has been sent. It’s the meaning of the word apostle.

Interestingly, the mud that Jesus applied to the man’s eyes was not black, as we may imagine, but white—a mixture of saliva with limestone powder. Why did Jesus choose to heal with a mud poultice? Was it a reminder to the man (and to us) that his eyes were originally fashioned from clay, that his whole body was made of dirt? Can He who made the eyes not remake them?

The brave new world this man set eyes on must have astounded him: the mystery of water, the ravishing play of sunlight, the elegance of the porticoed pool, the lovely surrounding hills. And then the greatest wonder of all: people. Had Jesus sent him to this pool precisely because of the natural beauty of the setting? Before facing the brouhaha with the Pharisees that was brewing back at the Temple, the man would need some time to collect himself, to sit in quiet amazement with feet dangling in water, reveling in his miracle.

Can someone born blind even begin to comprehend what he sees? In her book Pilgrim at Tinker Creek, Annie Dillard recounts that when modern surgeons first operated on people blinded from birth by cataracts, many newly-sighted patients saw “nothing but a confusion of forms and colors” that “did not mean anything but a lot of different kinds of brightness.” Some found the experience so disconcerting that they “refused to use their new vision” (pp 26-7).

In the gospel story, it seems clear that not only was this blind man given sight, but his brain was transformed to comprehend what he saw. A double miracle! Though he may well have felt initial bewilderment, by the time he confronted the Pharisees he was perfectly clear-headed: “One thing I know: I was blind but now I see!” (9:25)

Wherever you are, why not pause to take a fresh look at this beautiful world?

Here’s mud in your eye.

Next Week:  The Pool of Bethesda