He withdrew about a stone’s throw beyond them, knelt down and prayed. –Luke 22:41

If this book were about the trees of the Bible, rather than the rocks, we would now be at the heartwood of our story: the Garden of Gethsemane, home to an ancient grove of olive trees, some of which may be two thousand years old.

Even if the trees themselves are not that old, their root systems certainly are, for olive trees propagate through roots that virtually never die.

The world never looks so beautiful as when seen through the eyes of someone near death. The trees of Gethsemane truly are magnificent: large, gnarled, sublime, primeval. Seeing these, it is not hard to imagine them as among the very last glories of this dear old earth that Jesus saw, mere hours before He was destined to leave the natural world. 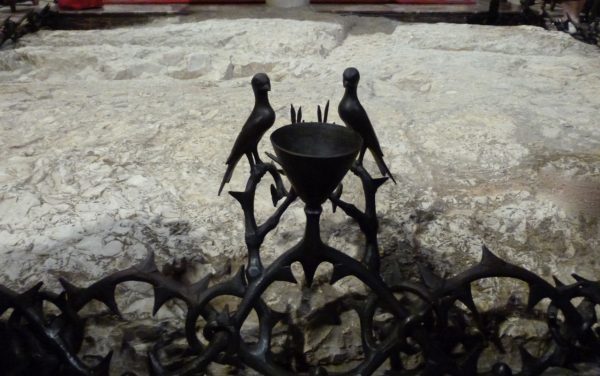 The Rock of the Agony

However, our focus here is not on the olive grove but on a nearby stone: the Rock of the Agony where Jesus is said to have prayed in great anguish on the night before He died. Located indoors now, in the apse before the altar of the Church of the Agony, this rock is normally surrounded by people kneeling, prostrating, caressing the stone, crying.

This rock marks the great turning point of Jesus’ life. He knew this night was coming, but here is where He squarely faced the terrible necessity of His own death. As He told the disciples, “My soul is overwhelmed with sorrow to the point of death” (Mt 26:38). It is difficult enough for us mortals to face this grim reality; we can scarcely imagine what it must have been like for Someone who had always existed, who lived and breathed immortality. This man thought of death differently from the rest of us, for to Him it held the shadow of total separation from the Father and the Holy Spirit.

“Being in anguish, He prayed more earnestly, and His sweat was like drops of blood falling to the ground” (Lk 22:44). This prayer at the rock marked the first crucifixion, the first shedding of the Savior’s blood, the first time the earth tasted the bitterly wrung-out wine of heaven.

This chapter, though it comes partway through my book, is the last one I wrote. Somehow unable to focus on this subject, I avoided it until there was no more avoiding. I think the word agony frightened me away, froze my own blood. The arrest, the trial, the scourging, even the crucifixion itself—these seemed more approachable, if only because of over-familiarity. But this lonely, ghastly torment in a garden, this man splayed across a rock as bare and white as bleached bone, with His favorite disciples just “a stone’s throw” away, unable to stay awake to keep their best friend company in His last hours on earth…

The disciples couldn’t do it. They couldn’t go there with Him, and neither can I. So I won’t pretend to. I’ll just end with these lines from George Herbert’s “The Agonie”:

Who would know Sinne, let him repair
Unto Mount Olivet; there shall he see
A Man so wrung with pains, that all His hair,
His skinne, His garments bloudie be.
Sinne is that presse and vice, which forceth pain
To hunt his cruell food through ev’ry vein….

Love is that liquor sweet and most divine,
Which my God feels as bloud, but I as wine.