Having finished praying, Jesus left with His disciples and crossed the Kidron Valley. –John 18:1

Here is where this book began, at this ancient Roman stairway known as the Holy Steps. Standing beside these steps on a hot Jerusalem afternoon, it suddenly struck me:  Jesus walked here.

The man I love, the Savior I worship, God Himself in flesh—His feet touched these stones!

The whole turbulent scene of that distant Passover eve swam into view: Jesus bound, hustled along by a cohort of Roman soldiers, accompanied by an incensed delegation of Jews and the temple guard, a disciple or two trailing at a distance …

At that moment, the theme of this book formed in my mind, and I knew I would have to tell the story of Jesus in stone. 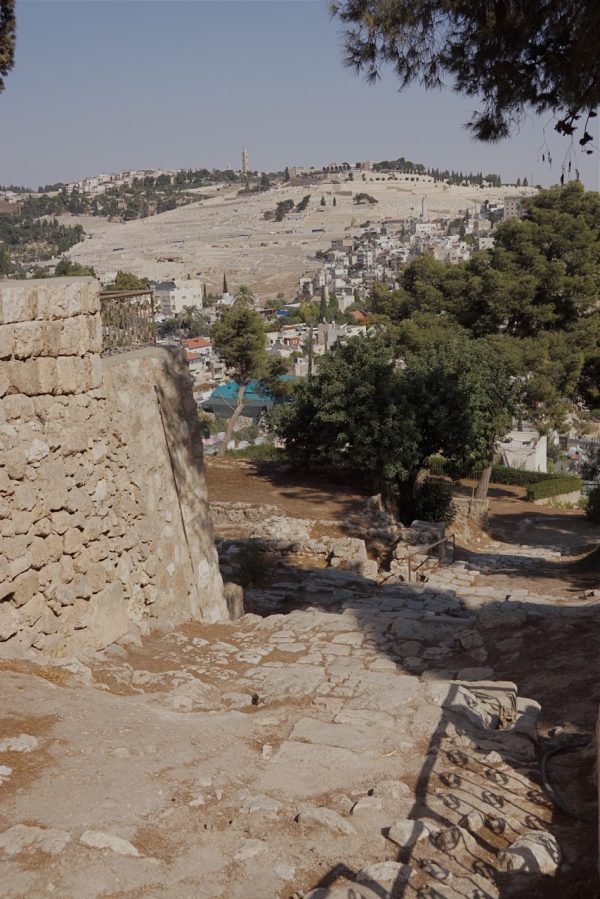 Located in the southwest quarter of Old Jerusalem, the Holy Steps are the route by which anyone in the first century would have traveled between the lower city and the upper city. Jesus must have used these steps often to descend from Mount Zion across the Kidron Valley (middle ground in the photograph) to the Mount of Olives (in the distance) where He regularly spent nights while in the city. If, as is probably the case, the Upper Room was located in the aristocratic district of Mount Zion, upon completion of the Last Supper Jesus and His disciples would have traversed these steps to the Garden of Gethsemane. Later that night, after His arrest, He would have been brought back up this street to the house of the high priest Caiaphas to stand trial.

Today this stone stairway is located beside the Church of St. Peter in Gallicantu (Latin for cock’s crow). Surmounted by a golden rooster, this church is built on what is thought to be the site of the palace of Caiaphas, where Peter’s triple denial of Christ took place. Another tradition places this event not far away, in the courtyard of the present Armenian Monastery of St. Savior, where the vaulted rooms of a palatial house have been excavated. In either case, the stone path that had to be traveled was the same.

As I gazed at these steps, the epiphany I had, a frisson of heightened awareness, is a common experience for pilgrims to the Holy Land. And also for archeologists. Haskel Greenfield has been digging at an Israeli site called Tell es-Safi that is fifty metres deep and covers an area of many acres. Among other things, the site is believed to have held the biblical city of Gath, home of Goliath. Says Greenfield about the dig, “You’re sitting there in a ditch and you’re looking out and you can still see the siege trenches from the time the Arameans came in the ninth century BC, and you realize that there is history in the Bible. The ancient world comes alive; it is not some distant fantasy. Your whole view of life changes when you encounter something like that.”

Yes. And particularly so when what comes alive in the scene before you is not just the Aramean army, but Jesus of Nazareth. The geography of one’s native land has a profound formative effect on character, and so it was with Jesus. The trees, the soil, the very rocks bear the stamp of His soul. Israel is literally God’s country, His homeland. It’s a part of the miracle of incarnation that Christ was only one man with one life, who came to one nation and one people—that God confined Himself to having the same limitations as everyone else. He had to choose a people and a country for Himself; He couldn’t be a man of all races and still be human.

Why are the worn stones of this stairway—indeed all the rude rocks celebrated in this book—so marvelous, so worth poring over, so thrilling? Only because the life of the One who alone is the perfection of beauty, the soul of love, has grazed and graced them.

Next Week:  The Sacred Pit

Posted in Books in Progress and tagged Jesus.