What is more inert, more inanimate, more incapable of voice than a stone?

Throughout this book we see an intimate connection between stones and prayer—in the Stone of Temptation, the Rock of the Agony, the use of stones as altars, etc. Now look at all these paper prayers crammed into crevices in the Wailing Wall in Jerusalem. Silence can be very loud indeed. 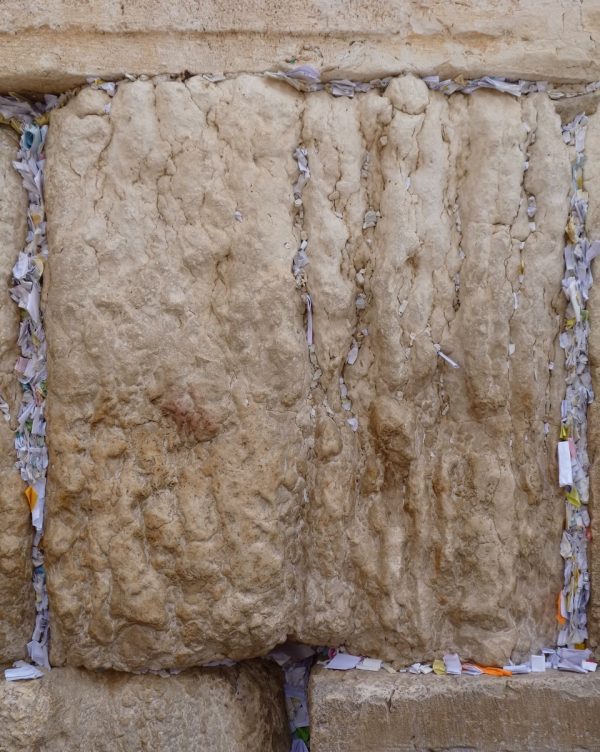 A prayer-infused stone in the Western Wall

It is the Sunday before Passover and the famous rabbi who has worked wonders throughout Israel is coming to town. As He rides on a donkey down toward the city, people throng His path waving branches and shouting, “Blessed is the king who comes in the name of the Lord!” Earlier in His ministry Jesus had resisted the impulse of the crowd “to come and make him king by force” (Jn 6:15), but now He welcomes their shouts of “Hosanna to the Son of David!”—a forthright acclamation appropriate only for the divine Messiah. To scandalized objections from the Pharisees—“Teacher, rebuke your disciples!”—Jesus makes a reply that brings us to the heart of this book: “I tell you, if they keep quiet, the stones will cry out.”

So many of Jesus’ words echo Old Testament scriptures. Here He reflects Habbakuk 2:11, where the prophet condemns those who build cities by bloodshed and injustice with the words, “The stones of the wall will cry out, and the beams of the woodwork will echo it.” What stones was Jesus declaring would cry out? Before going to Jerusalem myself, I assumed He meant the stones on the pathway He was riding along, or those of the adjoining fields. But no, I see now that He was gazing at the great city wall of Jerusalem, whose countless stone blocks were people, representative of living souls: the thousands of workers who had quarried them, carved them, carried them, built with them time and again through centuries. It was these, the poor of the world, who with raucous praises gladly received Christ as their King. To these citizens of the true Jerusalem the Lord says, “See, I have engraved you on the palms of my hands; your walls are ever before me” (Is 49:16).

An impoverished family I know dreamt for years of buying a house of their own. It seemed such an impossible hope that they used to say, “It will happen when pigs fly.” Today they are happily settled in their own beautiful home, where a small statue of a winged pig graces their front hall. “The stones will cry out” presents a comparable image: an utterly impossible blossoming into reality before one’s very eyes.

What the common folk of Jerusalem longed for in their Messiah was a deliverer who would free them from the Romans, and indeed from the religious oppression of their own leaders. That is why they shouted, “Hosanna!”—a Hebrew word meaning literally “Please save!” It was like the cry of a drowning man: Help! Save me! And when Jesus declared that even the stones would “cry out,” the Greek verb crazo, meaning literally to croak as a raven, and thus to scream or shriek, contains the double meaning of the English cry: both to shout out with enthusiasm and to wail desperately.

One day when Christ returns to earth to banish all God’s enemies and take full possession of His kingdom, pigs will indeed fly. This day is coming the way spring comes, the way the dawn comes, the way the tide comes rolling in unstoppably. If human beings will not accept Jesus Christ as King, then the very dust beneath their feet will. Mute rocks will rise up, spread stony arms, open mouths and throats and lungs and break into shouts of praise. “For I tell you,” ranted John the Baptist, “God is able from these stones to raise up children for Abraham” (Lk 3:8).

Next Week:  The Stele of Bethphage