Do you see all these great buildings? Not one stone here will be left on another; every one will be thrown down. –Mark 13:2

Jesus could be such a killjoy. One of His band of Galilean rustics, agog with wonder at the sights of the big city, exclaims, “What magnificent buildings!”

And what does Jesus do? Dumps cold water all over him, in words echoing the prophet Micah: “I will pour her stones into the valley, and lay bare her foundations” (1:6). 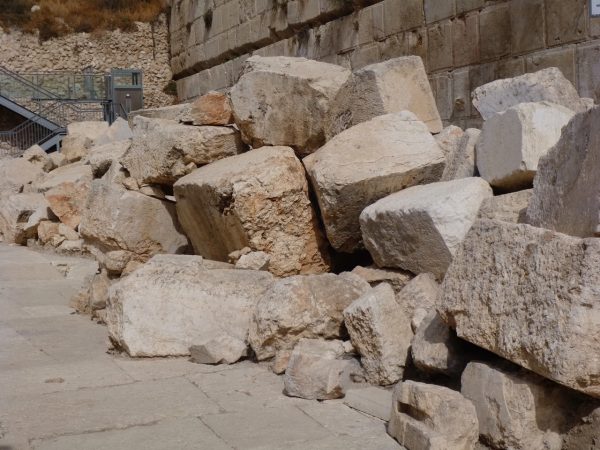 It’s amazing how right Jesus was: Every single stone on the Temple Mount really was thrown down. The photograph shows them, lying there to this day exactly as they were hurled down by the Romans on the Ninth of Av, AD 70, crushing the street below. Many other ancient sites have standing ruins—at least a column or two, part of a wall, a cornice. But not here. The entire Temple was razed. All that was left is a portion of the platform upon which all the former majesty flourished: the foundations laid bare, a wailing wall indeed.

Remember the moment of Jesus’ triumphal ride into Jerusalem when He halted the procession and wept over the city? Here’s what He was weeping about:

In response to a Jewish revolt, the Romans under the command of future emperor Titus surrounded Jerusalem and began starving the city. In order to quickly exhaust food and water supplies, Titus allowed pilgrims to enter for Passover, but refused to let them out, swelling the population to half a million rather than the usual 40,000. Moreover, infighting among the three rebel factions led to mountains of grain being destroyed in the city, and many Jews died at the hands of other Jews. The Temple courts ran with blood and gangs of brigands roamed the streets, looting and raping. Those suspected of hoarding were mercilessly tortured to reveal their secret caches. People ate shoes, old hay, cow dung, their own children. So many died that Jewish rites of burial ceased and decaying corpses piled up in the streets.

Outside the walls, too, “thousands of bodies putrefied in the sun. The stench was unbearable. Packs of dogs and jackals feasted on human flesh. In the preceding months, Titus had ordered all prisoners or defectors to be crucified. Five hundred Jews were crucified each day. The Mount of Olives and the craggy hills around the city were so crowded with crucifixes that there was scarcely room for any more, nor trees to make them.”(1)

During the final Roman assault, the invaders set fire to the Temple gates; the silver of the gates melted and spread the fire to the woodwork within, and soon the Holy of Holies itself was in flames. In horror and disbelief, countless Jews—including children, old men, priests—made a last stand around their most holy place, giving their necks to the Romans to be slit. Between the roar of the flames, the shouts of the soldiers, and the groans of the dying, wrote Josephus, “No one can imagine anything greater or more terrible than the noise.” There was so much blood that many fires were extinguished by the gory stream, for “the blood was larger in quantity than the fire, and those that were slain more in number than those that slew them.”(2)

The Arch of Titus, which celebrates the Roman victory over Jerusalem, still stands in Rome. Its most famous panel depicts soldiers in procession holding aloft temple treasures, including trumpets and censers, the showbread table, and the golden menorah. Curiously, the destruction of the Second Temple took place on exactly the same day of the Jewish calendar as the destruction of the First Temple by the Babylonians in 586 BC. This date is still mourned by the Jews in the annual fast of Tisha B’Av. On that day in many synagogues the congregants sit on the floor while the book of Lamentations is read.

Jerusalem remembers all the treasures
that were hers in days of old….
Look, O Lord, on my affliction,
for the enemy has triumphed.  (1:7,9)

(2) All these details, and many others as horrific, are found in Josephus’s Wars of the Jews. A rebel Jewish commander who defected to the Romans and became an advisor to Titus, Josephus wrote the sole eyewitness account of the fall of Jerusalem. His own parents were in the besieged city.

Next Week:  The Stones Cry Out