The tempter came to Him and said, “If You are the Son of God, tell these stones to become bread.” –Mt 4:3

It doesn’t look very comfortable to me. But on this stone, enshrined in the Monastery of Quarantal, Jesus is said to have sat to pray during His forty days in the wilderness. 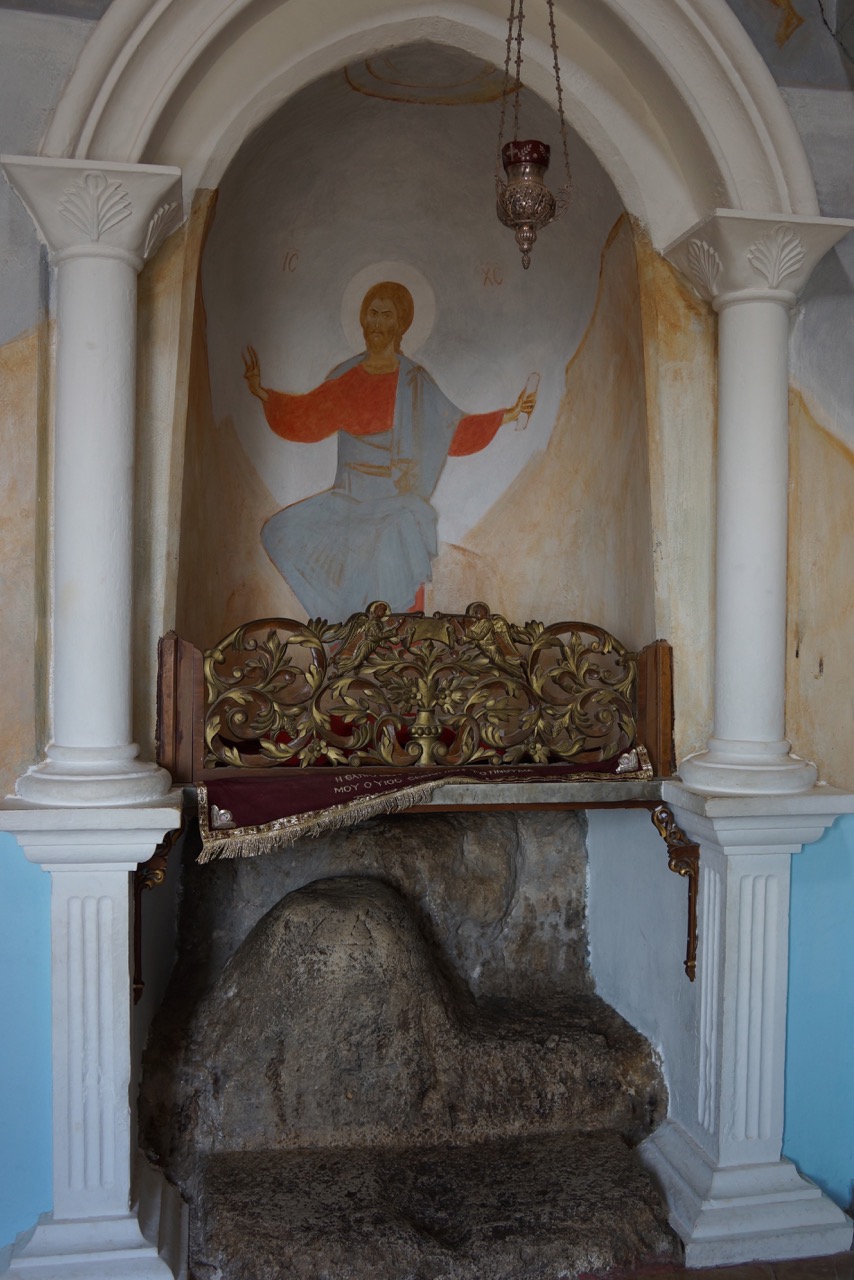 This stone is particularly associated with the first temptation, to which Christ gave the reply, “It is written, ‘Man does not live on bread alone, but on every word that comes from the mouth of God.’”

You may have noticed by now that the rocks I cover in this book all get the benefit of the doubt. I tend to believe in their authenticity, or at least in the traditions that underlie them. Where did these traditions come from? Does it ring true that someone just made them up? Jesus wasn’t a private man; He came to earth to reveal Himself, to let people in on the details of His life. Surely it is entirely possible that He showed someone the very stones the tempter had challenged Him to turn into bread, adding, “And here’s the rock I was sitting on when the devil approached Me.” In any case, if He didn’t sit on this rock, then He sat on another; there were no chairs in the wilderness.

I used to live beside a rushing mountain river. In spring the water level rose quite high, so the banks had been riprapped with granite boulders. I enjoyed sitting by the water, as close as I could get, and letting that glorious sound wash over me. I had a favorite rock, one that conformed beautifully to my body, as if made just for me. It’s amazing how comfortable a rock—the right rock—can be. And there’s something consoling about that, about finding a place of your own in the wild, a perfectly natural place with nothing manmade about it. Think of all the forces of nature that have contributed to forming such a place over eons—and it happens to be just right for you. It almost seems a sign of divine favor, as though the cosmos is not alien but enfolds you as a friend.

In a way, it is possible to have a relationship with a rock. There can be something there that gives back to one. A rock may even speak, saying, perhaps, in the words of Max Ehrmann’s Desiderata, “You are a child of the universe, no less than the trees and the stars; you have a right to be here.” A rock can be a word that comes from the mouth of God. Did the Stone of Temptation, perhaps, speak to Jesus? Did it help to ground and strengthen Him as He confronted the devil? Did it minister to Him as much as the angels did? Did it feed Him?

If nothing else, the totally natural quality of rocks—their wildness—like everything in nature can be cleansing to the soul. One time when my flight was delayed at London’s Heathrow Airport, I spent some time in the Multi-Faith Chapel, where I discovered a “Wadu Stone.” A smooth gray rock on a wooden pedestal, it was accompanied by the following information from a Muslim cleric: “Ritual purification is a prerequisite for Muslim prayer. If water is not available one may turn to earthly clean objects such as stone or sand. Two hands are placed on the stone and then passed over the face. The hands are then placed back on the stone before being passed over the back of each hand.”

In the various gospel accounts of Jesus’ forty days in the wilderness, one verse intrigues me above all: “He was with the wild animals, and angels attended Him” (Mk 1:13). As much as I love this juxtaposition of angels and animals, I’d like to add two words to this verse: and rocks. My Jesus is a man who valued common things and proclaimed them of priceless worth. I imagine Him finding solace in rocks, even more than if He had turned them into bread.

Next Week:  Christ Our Rock