The stone the builders rejected has become the capstone; the Lord has done this, and it is marvelous in our eyes. -Mt 21:42

Here we come to one of the central messianic images in the Bible.

The metaphor of Christ as the cornerstone rejected by the builders appears first in Psalm 118:22, and has echoes in both Isaiah 28:16 and Zechariah 10:4. Then in three gospels Jesus quotes this passage in reference to Himself, and Peter quotes it in his defence to the Sanhedrin (Acts 4:11). Finally it appears again in important passages in the letters of both Paul and Peter (Eph 2:20; 1 Pet 2:6-7). 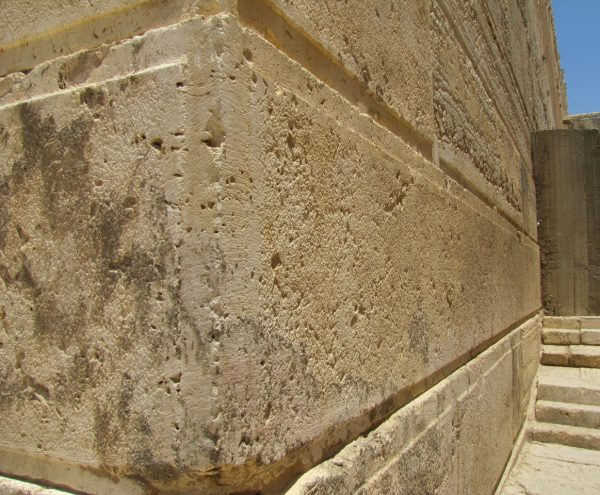 Southwest Corner of the Temple Mount

Scholars debate whether the correct translation of the word in these verses is cornerstone or capstone. In ancient masonry the cornerstone was the first stone layed in the foundation of a building, often a very large block, from which all other stones derived both their stability and orientation. This stone had to be squared and set perfectly true, as it determined the levels of all the other courses in six directions: east, west, north, south, up, and down. The capstone, on the other hand, was the last, often highly decorative, stone to be placed at the top of a building to complete it.

So which is right? Is Christ the first stone or the last? The answer, of course, is both: He is “the Alpha and the Omega” (Rev 21:6), the firm and true foundation of all God’s work, and also the beautiful crowning touch of creation. So the proper translation of this word is not just a moot point, but one that generates a lovely ambiguity.

The name of Jerusalem was originally Yerushalem, deriving from yeru, meaning foundation or cornerstone, and Shalem, meaning God Most High, Creator of Heaven and Earth (the name of the God worshipped by Melchizedek in Genesis 14:18). So Jerusalem means the foundation stone of Shalem—that is, the original cornerstone laid by the Creator when He built the earth. This idea is magnificently mirrored in Job 38 when God asks Job:

Where were you when I laid the earth’s foundation?…
On what were its footings set,
or who laid its cornerstone—
while the morning stars sang together
and all the angels shouted for joy?  (vv 4, 6-7)

Note that the custom of holding a celebration at the ceremonial laying of a cornerstone goes all the way back to the beginning of creation!

In several of the scriptures cited in the first paragraph above, the metaphor of the cornerstone is extended to a further image: Isaiah calls it “a stone that causes men to stumble and a rock that makes them fall” (8:14; quoted in 1 Pet 2:8), and in the words of Jesus, “Everyone who falls on that stone will be broken to pieces, but he on whom it falls will be crushed” (Lk 20:18). In the ancient gutter under the road that runs along the western wall of the Temple Mount, there is a place where one must bend down to pass beneath a huge ashlar stone wedged overhead, which has obviously been there since the day it fell during construction in the first century. It’s a sober reminder of the sort of accidents that could happen in the course of handling such enormous blocks.

King Nebuchadnezzar learned this lesson in his dream of a colossal statue composed of gold, silver, bronze, iron, and clay. While he marveled at this sight, “a rock was cut out, but not by human hands. It struck the statue on its feet of iron and clay and smashed them,” and then “the rock that struck the statue became a huge mountain and filled the whole earth” (Dan 2:34-5).

When we acknowledge the Rock who is Christ, we discover not a monstrous and crushing weight but “a precious cornerstone for a sure foundation,” in whom “the one who trusts will never be dismayed” (Is 28:16).

Next Week:  The Destruction of Jerusalem

Posted in Books in Progress.