He had Jesus flogged, and handed Him over to be crucified. Mark 15:15

This fragment of a column, composed of red porphyry, is housed in the Franciscan Chapel of the Church of the Holy Sepulcher in Jerusalem. Is it the actual column to which Jesus was tied to undergo flogging? 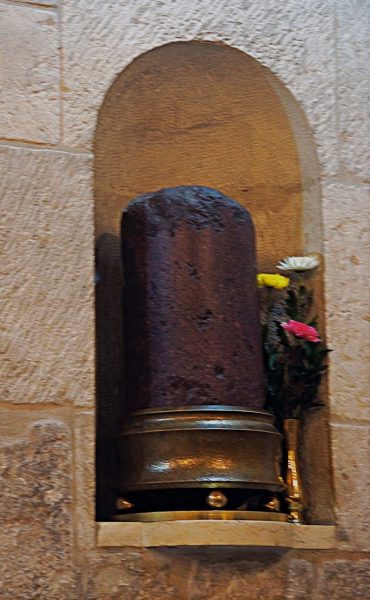 Column of the Flagellation in the Franciscan Chapel

A more famous fragment is preserved in the Church of Saint Praxedes in Rome. However, the column in the Franciscan Chapel was brought there in 1553 from the Upper Room, or Cenacle, where Jesus and His disciples celebrated the Last Supper. While the existing Cenacle is certainly not the original first century building, it replaced another building that very likely was the authentic site of the Last Supper. So there is good reason to believe that Jesus’ scourging post may have been preserved in this location, where for centuries prior to its removal it was venerated by believers.

The term flagellation derives from the Latin flagellum, a multi-lashed whip of leather thongs imbedded with pieces of lead and bone. Scourging—the proper term for this Roman punishment—was a torture perhaps equally excruciating as crucifixion, and could likewise be fatal. “Five times I received from the Jews the forty lashes minus one,” wrote Paul (2 Cor 11:24), although the Jewish method of flogging was not nearly as severe as scourging. The weighted thongs of the Roman lash tore open the skin, exposing innermost veins, muscles, organs, bowels. An anonymous sixth century pilgrim testifies that the column to which Jesus was bound bore “a mark where His hands grasped it, like an impression on wax.” You who aspire to be a pillar of the church: Have you embraced this pillar?

Like everything else touching His death, Jesus knew and predicted this part of His agony, saying the Son of Man would be handed over to the Gentiles, who would “flog him and kill him” (Lk 18:32). It was also prophesied by Isaiah: “I offered my back to those who beat me” (50:6), and “with His stripes we are healed” (53:5 KJV).

Between scourging and the crown of thorns, our Lord shed a good deal of blood before arriving at the cross. If He was only a man, this spilled blood might have little claim on our attention; so much human blood has flowed throughout history. But if Jesus was also God, then His blood poured out onto the ground—the only perfectly pure blood ever shed—means everything. “For the life of a creature is in the blood, and I have given it to you to make atonement for yourselves on the altar” (Lev 17:11).

As a boy I was much impressed by the movie Ben Hur. Besides the famous scenes of the galley slaves and the chariot race, one other picture lives vividly in my memory. The face of Christ is never shown, and the name of the actor who played Jesus (Claude Heater) does not even appear in the credits. But we do see Jesus’ blood. At His death on Calvary, the clouds burst and the sky weeps torrentially, and as the Savior’s blood drips into pools of rainwater and runs into rivulets, on its way down the hill it heals a leper. By the time it reaches the river we know that it will flow into the whole world, transforming all it touches, dyeing the earth a color it has never known.

It is one thing to ponder a stone stairway that Jesus’ living feet may have trod, but now we come to contemplate His lifeblood incarnadining the earth. The sacrament of the eucharist was instituted at the Last Supper, but it began to be actualized at the Column of the Flagellation.

Next Week: The Church of the Holy Sepulcher