As they led Him away, they seized Simon from Cyrene … and put the cross on him and made him carry it behind Jesus. –Luke 23:26

The first ten Stations of the Cross on the Via Dolorosa probably preserve no authentic first century remains. But Station Five—“Simon of Cyrene helps Jesus carry His cross”—does exhibit one arresting stone artifact.

The gospels do not specifically state that Jesus stumbled while carrying the cross, but Isaiah 59:14 foresaw this (“Truth has stumbled in the streets”), and the fact that someone had to be pressed into service to help the Lord suggests how sorely He struggled. If a man were about to fall in a narrow street, wouldn’t it be natural for him to reach out and place a hand on the wall for support? This is what we see in the photograph: the stone where Jesus allegedly placed His hand as He stumbled. 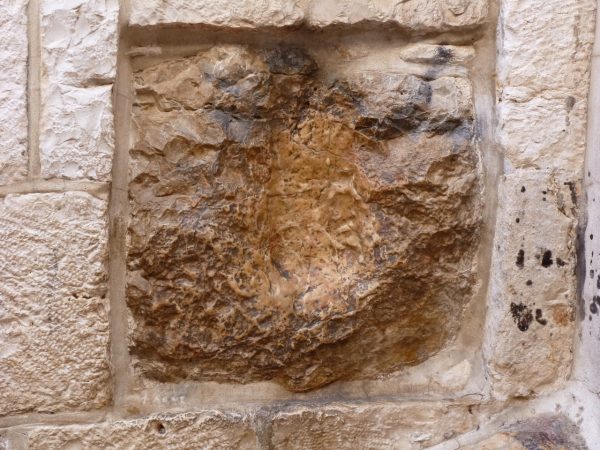 Stone Handprint, Station 5 of the Via Dolorosa

Is this the very stone touched by the Lord? Might not such a stone, bearing its bloody handprint, have been preserved by a shopkeeper along the original Via, and thereafter honored by two millennia of believers? If not the stone itself, then at least the story of it has survived.

What is indisputably true is that generation after generation of pilgrims have desired to touch this stone, placing their warm hands upon the cool rock until gradually, over centuries, the surface has been worn down into a deep, collective palm-print. And still today this custom persists. For Jesus’ triumphal entry into Jerusalem, the crowd waved palms, but now on the Via Dolorosa palms assume a different significance. The first palms hailed His strength; the second palms identify with His weakness. By touching our hands to the same place where Jesus may have touched His, we show our willingness to stumble as He stumbled, to suffer as He suffered. So this stone handprint really has been made by Christ, that is, by His own body, by those who love Him.

Rock is known for its durability, but this one represents fragility—the weakness embraced by everyone who travels the way of the cross. How interesting that so much weakness actually wears away the strength of the rock. Similarly in nature, rock and water are locked in a perpetual dance in which the softer water eventually proves the more powerful element.

Is there not something infinitely pathetic about Jesus falling? The whipping, the nails, the hanging on the cross—these are horrific. But for Jesus to stumble in the streets, not once but three times (according to the tradition of the Stations)—this is such a piteous thought. At the scene of a tragedy, sometimes the smallest of details leaves the most vivid impression: the still-warm meal on the table; the child-sized helmet in the road. Think what it meant for the Son of God, who shows the whole world the path of life, to miss His step on the path to death; for the One who lifts us all up, to fall down; for the One who is our strength, to crumple in weakness. Humiliating enough that He should have to carry His own cross—but to find that He cannot do it, that He is too feeble, that someone else must be enlisted to help Him….

Let us reflect on this as we too are called to carry our cross. We may stumble many times, we may be unequal to the task, we may need help. We desire and need a Savior who is strong, but here, on the path to Calvary, we encounter a different kind of strength: the strength of humiliation, of agony, of falling down and not being able to rise. We discover what Paul learned in the epic struggle of his life: “When I am weak, then I am strong” (2 Cor 12:10).

If we do not feel as close to Jesus as we’d like to, it is probably for two reasons: We are afraid of His strength as God, and we are afraid of our own weakness as mere humans. The stone handprint on the Via Dolorosa, formed by the frail flesh of thousands of believers, holds an answer for both fears.

Next Week: The Pillar of Flagellation