You have put me in the lowest pit, in the darkest depths. –Psalm 88:6

The night Jesus was arrested He was taken to Caiphas, the high priest, where He was tried summarily and beaten.

The next thing we’re told is that “early in the morning, all the chief priests and the elders of the people came to the decision to put Jesus to death” (Mt 27:1). This text raises the question of what might have happened during the rest of that night, in the wee hours of darkness? Apparently the Jewish officials retired to their beds to sleep on the delicate question of what to do with this upstart messiah. But what about the prisoner? How did He spend that night?

Underneath St. Peter in Gallicantu, the church built over the probable site of the palace of Caiaphas, are the remains of a fifth-century shrine with Christian markings on the walls, including seven Byzantine crosses. On a still lower level there is a network of first-century caves, one of which is known as the Sacred Pit. Here the early Christians believed Jesus was confined on the night before He died. 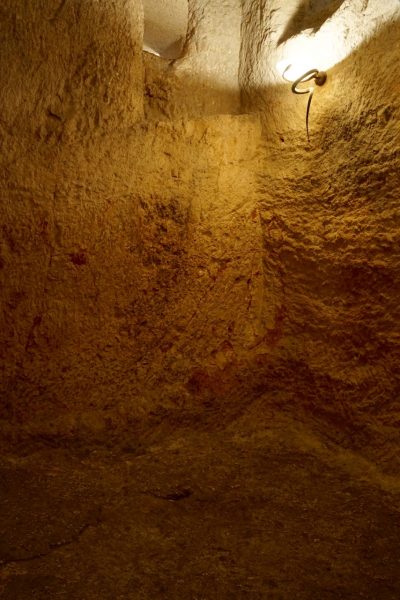 The Sacred Pit is about fifteen feet square, twenty feet deep. No door, no window, no light. The only entrance is through a narrow, bottleneck opening at the top, through which a prisoner was lowered by a harness of ropes secured around shoulders and chest. It wasn’t enough for God to be confined to a human body; He had to be further confined in a dungeon. There we had Him where we’ve always wanted Him: God in a box.

My soul is full of trouble
and my life draws near the grave….
You have put me in the lowest pit,
in the darkest depths….
I am confined and cannot escape….
You have taken my companions and loved ones from me;
the darkness is my closest friend. (vv 2, 6, 7, 18)

That’s how the psalm ends: “Darkness is my closest friend.” No comforting grip on faith, no gleam of hope, no final uplift. Was this, perhaps, the soundtrack of Jesus’ thoughts during His last night?

Meanwhile, stretched out on his comfortable bed overhead, was the man who put the Son of God in the pit losing any sleep? Caiaphas, high priest from 18-36 AD, played a large and crucial role in the passion of Christ, for he initiated the plan to kill Jesus, presided over His late-night trial, and finally handed Him over to Pontius Pilate. Moreover, he was a prophet, albeit unwittingly, for “Caiaphas was the one who had advised the Jews that it would be good if one man died for the people” (Jn 18:14).

In November of 1990, construction workers building a water park in Jerusalem accidentally broke into a burial cave that had been sealed for two thousand years. Within were twelve limestone ossuaries, or bone boxes, one of which was exquisitely decorated and had obviously belonged to a person of wealth and high rank. Inscribed on this box in two places was the name Caiaphas. Inside, among other remains, were the bones of a sixty-year-old man. Other inscriptions make it clear that this was indeed the family resting place of the man who handed over the Son of God to death.

How surprised he must be now to know that there are no bones in the tomb of Jesus.