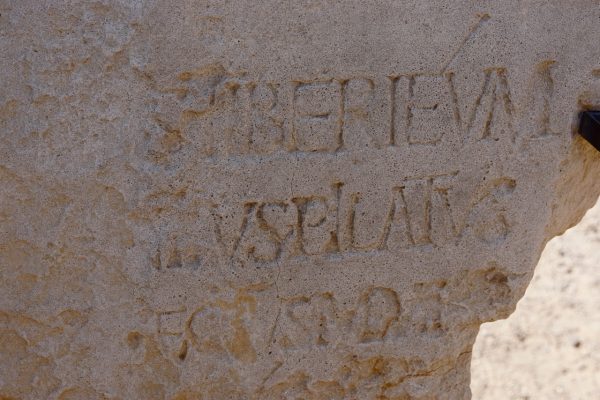 It’s not much to look at. It’s badly damaged, the inscription only partially legible. But it’s the only archaeological evidence (apart from a few small coins) for the existence of Pontius Pilate, Prefect of Judea from AD 26-36. Look closely and you’ll see his name and title in Latin: [PON]TIUS PILATUS … [PRAEF]ECTUS IUDA[EA]E. From the top word, TIBERIEUM, we can infer that the full inscription marked Pilate’s erection of a temple in honor of the Emperor Tiberias. This limestone plaque, measuring two feet by three, was discovered in 1961 in excavations at the ruined theater of Caesarea Maritima, the city of Pilate’s official residence. The slab had been turned upside down and used as the landing for a flight of steps—a fitting comeuppance (or should we say comedownance?) for the man who passed the death sentence on Jesus Christ.

But wait: Let’s not write this fellow off so quickly. He has the distinction of being the only official whom Jesus chose to engage in conversation during His trial. And some of his recorded sayings and actions rival those of Jesus Himself for memorableness: the public washing of his hands; “What is truth?”; “Behold the man!”; “Shall I crucify your king?”; “What I have written, I have written” (Jn 18:38, 19:5,15,22). Pilate is a complicated figure. By some accounts he sincerely respected Jewish culture and did his best to avoid violence, yet other accounts paint him as so insensitive to local customs that he often caused near-insurrections. There is, for example, the strange case of “the Galileans whose blood Pilate had mixed with their sacrifices” (Lk 13:1). How infuriating such a brutal and blasphemous act must have been to the Jews!

Clearly, being the Roman governor of Judea was not an easy job, and nowhere is this more evident than in the trial of Jesus. Repeatedly Pilate tried to stave off the crucifixion, motivated by a complex mix of political instinct, his own fascination with the magnetic rabbi, his conviction of the man’s blamelessness, and the fact that his wife had “suffered a great deal” because of a dream about “that innocent man” (Mt 27:19). Not even in Shakespeare do we find a more nuanced character.

Among Christians these days Pilate tends to get a bad rap, but it has not always been so. Saint Augustine ranked Pilate among the prophets, and the church father Tertullian believed the Prefect was innately a Christian, siding in his heart with Jesus. The Ethiopian Church went so far as to make him a saint, based on the belief (inspired by the apocryphal Acts of Pilate) that he converted to Christianity and was martyred. His name even found its way into our creeds, both the Apostles’ and the Nicene: It is an article of our faith that the same Christ who was “very God, of very God” was “crucified also for us under Pontius Pilate.” Why is this phrase important? With the discovery of the Pilate inscription, now more than ever this name fixes Jesus in secular history as surely as nails fixed Him to the cross.

How intriguing it would be if this chief eyewitness of Christ’s trial had left some personal memoir of those proceedings. But alas, only one authentic phrase of Pilate’s own writing actually survives: the words of the titulus (sentence inscription) that he ordered fastened to the cross: Iesus Nazarenus, Rex Iudaeorum (Jn 19:19). How telling it is that the highest Roman official of the land was sufficiently impressed with Jesus to be constrained to give public testimony in three languages that this man was indeed King of the Jews.