When Jesus came out wearing the crown of thorns and the purple robe, Pilate said to them, “Here is the man!” –John 19:5

The Ecce Homo Arch marks the beginning of Jerusalem’s Via Dolorosa. 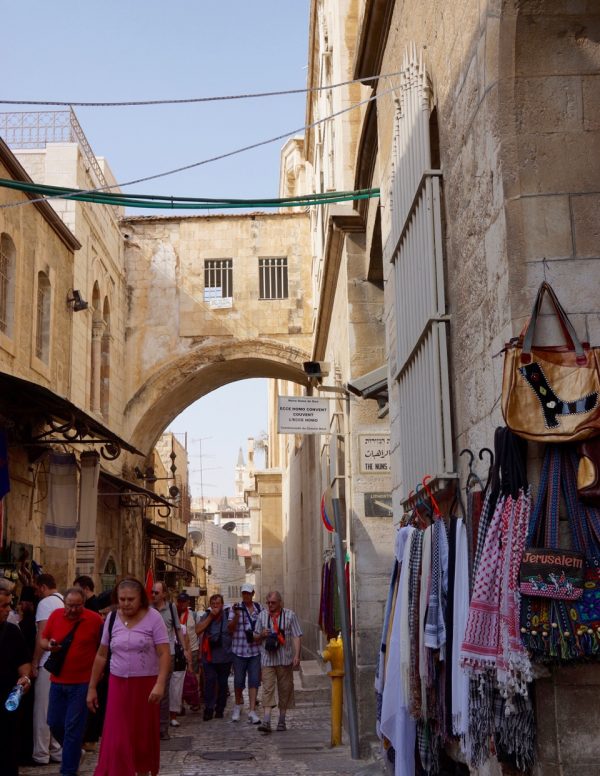 This is the route along which Jesus carried His cross from the place where He was condemned by Pilate, through the narrow, crowded streets of the city, and outside the walls to the place of crucifixion at Calvary. The phrase ecce homo is Latin for Pilate’s announcement upon presenting Jesus to the hostile crowd: Behold the man!

Yes, let’s heed Pilate’s exhortation and take a good look at this man: bound, scourged, purple-robed, thorn-crowned, about to be handed over to mob rule and tortured to death. For what? For doing miracles, for healing on the sabbath, for being wiser than anyone else, and for daring to suggest that God, rather than sending the long-awaited messiah as a mere man, had come Himself in person.

Pilate’s presentation of Christ is one of the most famous scenes in art, depicted by Titian, Caravaggio, Correggio, Tintoretto, and many others. And just as famous as the scene itself are Pilate’s words. Why? Partly because, all unwittingly, Pilate echoes a well-known messianic prophecy in Zechariah 6:12: “Here is the man whose name is the Branch…. It is he who will build the temple of the Lord, and he will be clothed with majesty and will sit and rule on his throne.”

The profound irony of Pilate’s words strikes even deeper. Here is Jesus, surrounded by people, some of them very important people. Saying much more than he knew, Pilate presents this tortured figure as no mere man, but as the man: the true man, the new man, the human being par excellence. For this Christ, this Son of Man, truly is the first of a new species of homo sapiens, one who stands before us bleeding, humiliated, yet inviting us to participate by faith in a brand new, gigantic leap of human evolution.

The Ecce Homo Arch in the photograph is not the actual site of this momentous scene. Tradition long held it to be so, as the arch was thought to have been part of the gate of the Antonia Fortress, the probable location of Jesus’ trial by Pilate. But as it turns out, this arch was built by Hadrian over a century later. Nevertheless it is definitely in the vicinity of the old Antonia Fortress, and it is as close as we will come to having a memorial of the place where Jesus was condemned.

Or is it? Does the Ecce Homo Arch really mark the authentic start of the Via Dolorosa? Or did Christ’s trudge to the cross actually begin on the far side of the city, not at the Antonia Fortress but at Herod’s palace? The answer to this complex issue hinges upon one question: When Pilate came to Jerusalem for the Passover Feast, where did he reside? Did he, according to the custom of Roman governors, stay at the palace of Herod? Or did he go to the Antonia Fortress beside the Temple, where he could better keep an eye on the Jewish festivities?

Against the majority of scholarly opinion, I tend to side with the latter thesis. For this I have several reasons, including the weight of tradition (which I don’t think should be easily discounted) going back to at least the early fourth century, and also the fact that the gospels testify that Pilate “sent” Jesus to Herod, “who was also in Jerusalem at that time” (Lk 23:7). This wording implies, I sense, a greater distance between the two than merely neighboring rooms in the same palace. Finally, my chief reason is a surprising statement in Luke 23:12: “That day Herod and Pilate became friends—before this they had been enemies” (23:12). Enemies don’t usually shack up together.

So behold Jesus, the Prince of Peace, even in His last moments on earth—especially in these last moments—reconciling even His enemies to one another.