You are the salt of the earth. But if the salt loses its saltiness, how can it be made salty again? It is no longer good for anything, except to be thrown out and trampled by men. –Mt 5:13

While we’re on the topic of rocks, let’s not forget salt. It’s a rock which, strange to say, we eat. Arguably it is the only edible rock.

Strictly speaking, salt cannot become unsalty; sodium chloride is a stable compound. But in the ancient world it often contained impurities, and if the soluble salt were leached away, what remained was a useless sludge. The danger Jesus warned against was not so much a loss of salvation as a loss of efficacy. 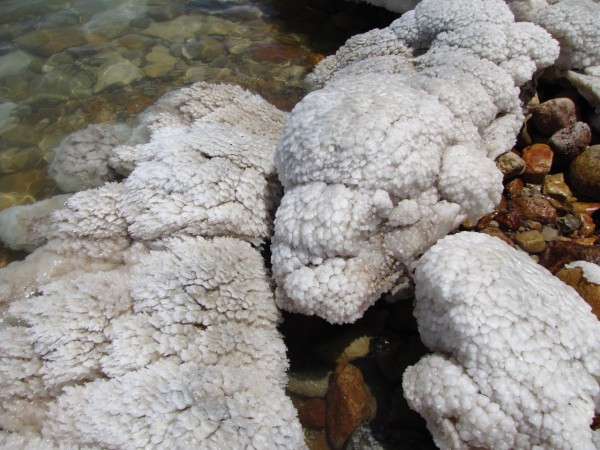 Salt has always been plentiful in Israel, coming from the vast salt pans of the Dead Sea. While we have no record of Jesus ever visiting that region, it’s hard to believe He didn’t, for it’s only a few miles from the probable site of His baptism, near al-Maghtas (Arabic for baptism or immersion), not far from where the Jordan River enters the Dead Sea. And it’s likely that Jesus spent at least some of His forty-day fast in the wilderness bordering the Dead Sea, in the same area where David hid as a fugitive from Saul.

In any case, salt would have figured large in Jesus’ imagination, as it did for every Israelite, for in a hot country it was a vital preservative. In the words of Pliny, a Roman first century naturalist, “Nothing is more useful than salt and sunshine.” Jesus makes the same pairing, calling believers both “the salt of the earth” and “the light of the world” (Mt 5:14). White, pure, tasty, and indispensable, salt is a fine image for the effect that Christians should have on their decadent society.

Jesus makes one other, much stranger reference to salt when He counsels disciples to amputate hands, feet, and eyes rather than have their whole bodies thrown into hell. The passage concludes, “Everyone will be salted with fire” (Mk 9:49). A mysterious verse, it can perhaps be understood by the fact that all sacrifices of grain were to be accompanied by salt, a symbol of the divine covenant (see Lev 2:13). As Christians we are to be a total sacrifice, sanctified by the fire of suffering. In a way, Jesus’ two references to salt amount to the same idea: If you want to be My disciples, it’s no use applying just a little salt to your dead meat; rub it in well and thoroughly.

When I visited the Dead Sea, I asked our tour guide if anything was alive in these waters. With a scornful toss of the head he answered authoritatively, “Nothing lives in the Dead Sea. That’s why it’s called dead!” For once he turned out to be wrong. Later I learned that a group of halophilic (salt-loving) microbes called Archaea are found here, as well as Dunaliella parva, a single-celled green algae. In 1998 three species of fungi were discovered, one of which is new to science and cannot survive without salt. In addition, life flourishes in freshwater springs on the Dead Sea floor. In the words of Gerard Manley Hopkins, “There lives the dearest freshness deep down things.”

This last fact strikes me as a powerful image of life in Christ. Paul wrote, “If Christ is in you, your body is dead because of sin, yet your spirit is alive because of righteousness” (Rom 8:10). For years as a Christian I pictured God as being somewhere “up there,” which is where I directed my prayers. It came as a great revelation to discover Him actually living “down there,” within my mortal flesh, “a spring of water welling up to eternal life” (Jn 4:13).

Next Week:  The Jerusalem Wall