Then Solomon began to build the temple of the Lord in Jerusalem on Mount Moriah, where the Lord had appeared to his father David. –2 Ch 3:1

The most outstanding landmark in all of present-day Jerusalem is neither a Christian nor a Jewish site, but Muslim.

Seeming to float above the city with its stunning hemisphere of aluminum bronze (not gold), the Dome of the Rock not only dominates the skyline but is one of the world’s most beautiful masterpieces of sacred architecture. 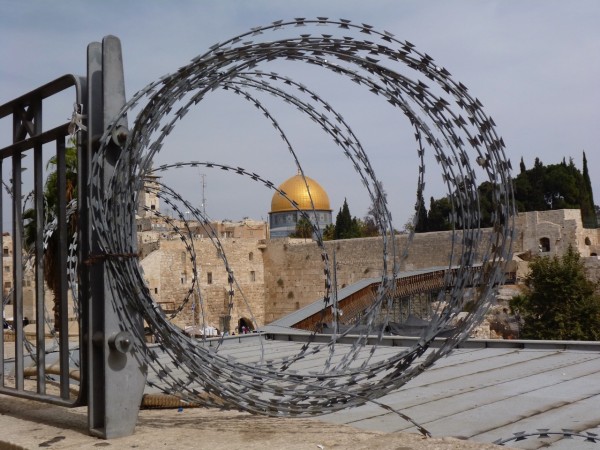 The Dome of the Rock as seen from the Jewish Quarter

What is a Muslim shrine doing in a book about stones significant to Christians? Quite simply, this building houses what is said to be the very rock on which Abraham bound his son Isaac as a sacrifice, thus prefiguring the supreme sacrifice of God’s son on Calvary.

Moreover, this rock outcropping at the summit of Mount Moriah is known as the Foundation Stone (al-Sakhrah in Arabic) because according to Talmudic legend it is where the creation of the world began. The dust from which Adam was made was picked up here. Hence the florid, Eden-like decorations that have graced the successive temples occupying this site, from today’s Dome with its luxuriant mosaics of foliage and trees and flowers, back to the Temple of Solomon who “carved cherubim, palm trees, and open flowers … on the walls all around the temple, in both the inner and outer rooms” (1 Ki 6:29). 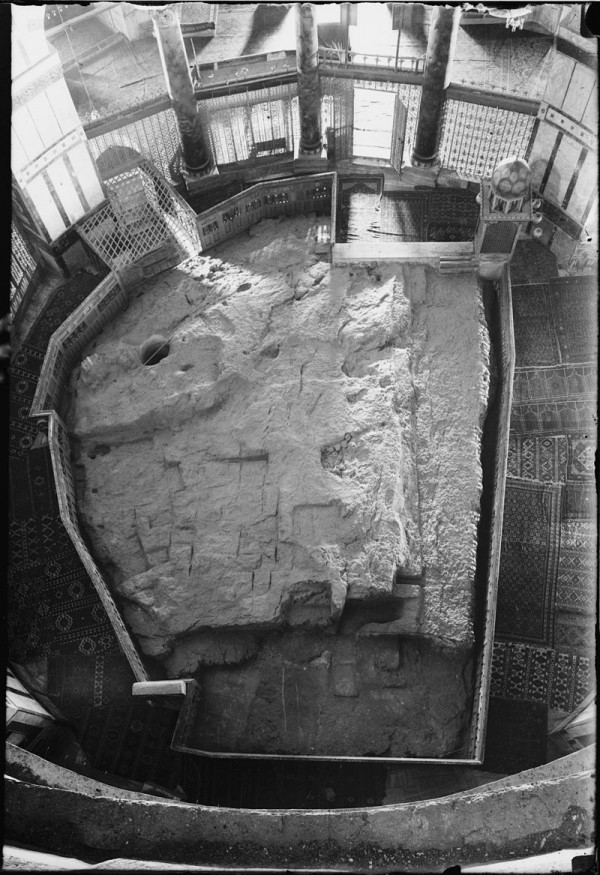 The Foundation Stone (al-Sakhrah) inside the Dome of the Rock

This indeed is where the Jewish Temple once stood, on the former threshing floor of Araunah the Jebusite, where David built an altar to appeal to the Lord who answered by stopping a plague (2 Sam 24:25). The very Holy of Holies stood on this rock; in fact, near the center of the black-and-white photograph is a rectangular cut in the rock which matches the dimensions of the Ark of the Covenant as specified in Exodus 25:10. Also visible are other markings that may have been channels for blood from sacrifices on the altar of burnt offering. If so, then these are the only remaining traces of Solomon’s Temple.

To the Muslims the sacredness of this site is next only to that of Mecca and Medina. For here the prophet Mohammed is believed to have ascended to heaven, following his night journey to Jerusalem mounted on the winged, human-faced steed Buraq (a tradition that developed only in the twelfth century; Jerusalem is not mentioned anywhere in the Koran). The Dome of the Rock was built in 691 by Abd al-Malik after the Arab conquest of Jerusalem, and features a circular 800-foot-long mosaic in Arabic denouncing the doctrine of the Trinity: “God is only one God. Far be it from his glory that he should have a son,” etc. The site was recaptured briefly by the Crusaders in the twelfth century, then again in the Six-Day War by the Israelis, who promptly returned it in order to avoid a global religious conflict.

Al-Sakhrah is known also as the Pierced Stone because it has a hole at the southeast corner (visible at upper left in the photograph) which leads to a cavern beneath the rock. In the cavern is a shallow depression, covered by a marble slab, called the Well of Souls. When I visited the Temple Mount, I so wanted to see this famous rock and to descend into the cave beneath. But since the year 2000 only Muslims are admitted to the Dome.

Six months later, however, back home, I went on my own night journey to Jerusalem, when in prayer I had a vivid sense of being taken by God into the heart of the Foundation Stone and resting there in sublime peace. For all those who believe in Christ, the curtain that veils the Holy of Holies has been torn open, and we have free access.

Photo #1: “The Dome of the Rock and the Western Wall, through Razor Wire,” by Mike Mason

Photo #2: “The Rock of the Dome of the Rock,” Wikimedia Commons

Next Week:  The Pool of Siloam