They brought Jesus to the place called Golgotha (which means The Place of the Skull). –Mark 15:22

Just inside the entrance to the Church of the Holy Sepulcher is a narrow stone staircase, at the top of which are two ornate chapels. The one on the right commemorates the nailing of Jesus to the cross. The one on the left marks the site of His crucifixion. 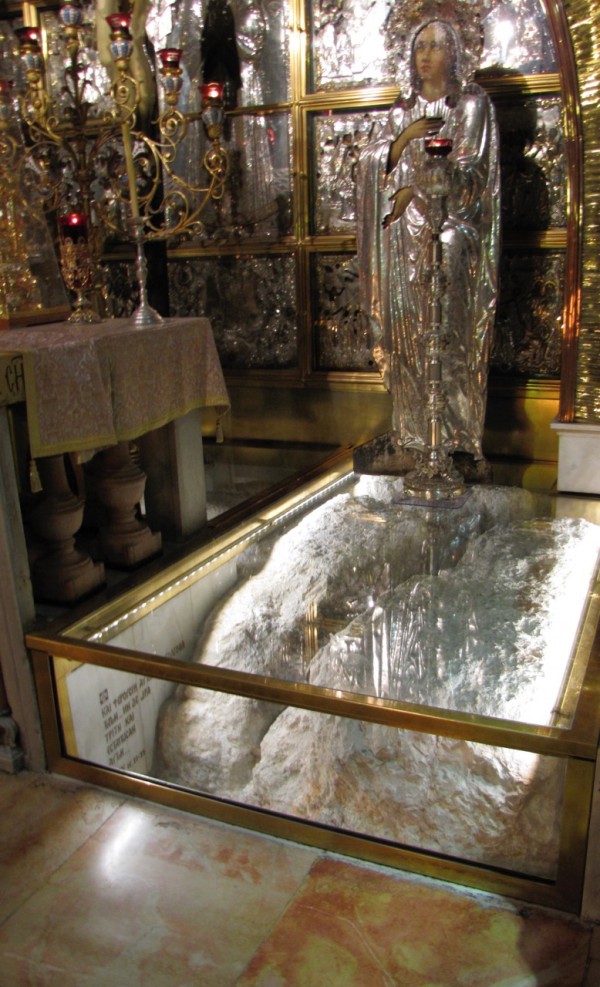 The Rock of Calvary

On either side of the lefthand altar are black marble discs where the crosses of the two thieves stood. In between, beneath the altar, marked by a silver disc with a hole in the center, is the place of Jesus’ cross. Visitors can reach their hands into the hole and touch the rock of Calvary below. The bone-colored limestone is also visible, behind glass, on either side of the altar. In the photograph, note that the rock is cracked—perhaps evidence of earthquake activity, which accords with the gospel report that at the moment of Jesus’ death “the earth shook and the rocks split” (Mt 27:51). It is even possible that the crosses were wedged into such fissures, for as the northern extension of the Rift Valley, Israel has been subject to recurrent earthquakes (see Ps 46:2). On a more devotional note, this crack in the rock brings to mind the old hymn, “Rock of Ages, cleft for me, / Let me hide myself in Thee.”

The name Calvary comes from the Latin Calvariae Locus, meaning The Place of the Skull (Golgotha in Aramaic). Early writings describe a hill resembling a skullcap near one of the city gates. Excavations within the church building have revealed that the rock outcropping it covers was a rejected portion of an ancient quarry, left standing because of the poorer quality of its stone. This may hint at a possible double meaning behind the phrase “the stone the builders rejected” (1 Pet 2:7). A larger portion of the rock of Calvary is preserved in the church basement in the Chapel of Adam. From earliest Christian times Calvary was believed to be the site of the tomb of Adam, suggesting that the name Golgotha referred to the place of Adam’s skull. Or perhaps the name derived from the skull of the giant Goliath, which according to scripture David took to Jerusalem (1 Sam 17:54).

The historian Theodoret relates that after the discovery of the Holy Sepulcher by Constantine (actually by his mother, who supervised the excavations), three wooden crosses were found buried nearby. “All held it as certain that one of these crosses was that of our Lord Jesus Christ … yet they could not discern which.” Accordingly, a woman who had suffered from a serious illness for many years was touched by each of the three crosses in turn, while earnest prayer was offered. By this means the Lord’s cross was revealed, for “the instant this cross was brought near the lady, it expelled the sore disease and made her whole.” In the church basement one can still see the place where these three crosses were discovered, as well as view a relic of the true cross itself. This is why the traditional site of Calvary is so close to the Holy Sepulcher, even housed under the same roof, for as scripture confirms, “the tomb was nearby” (Jn 19:42).

In our survey of stones in the life of Jesus, a future chapter will consider metals, specifically coins, as falling under the rubric of rocks. Perhaps here is the place to mention iron: in particular the nails and the spear that pierced Christ’s flesh. Here our Lord not only touched rock but took it into Himself, so deep was His identification with the earth. Of all the stone objects discussed in this book, none was closer to Jesus than these iron nails—one of which, incidentally, Constantine is said to have melted down to forge a bit for his war horse.

Next Week:  Who Moved the Stone?

(Note: So far this book has followed the story of Jesus chronologically. This week and next, however, chapters will be published out of sequence in observance of Good Friday and Easter. On April 6 the proper sequence will resume with Chapter 43.)